After waiting 10 hours in the Lima airport–on the floor; 4 more hours in the hot bus station, and 16 hours in the bus–my body was really tired of sitting and what do I do when I finally arrive in Arequipa? Take a nap! Actually, take two naps in one day! And then slept all night! And so ended my first day in Arequipa Peru.

But before that, I had an interesting, and exhausting trip from Corpus Christi, Texas (where I visited family for a few days) to Lima. As the plane landed in Lima at about 11:30 pm, I said to myself, “Well, there’s no backing out now!” Getting through immigration and customs was a breeze. A very cute young man saw me through immigration. I told him that I would be here until May 5. He insisted on giving me a 5 month visa–“just in case…Welcome to Peru!” 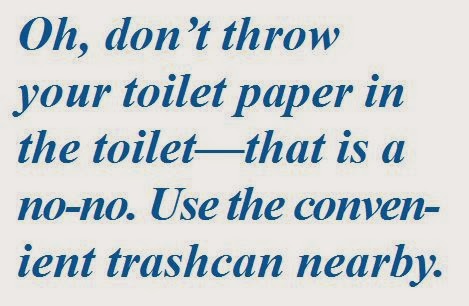 Then I had to find a place to sleep in the airport. I did not want to try to figure out where to stay over just one night when I would be leaving Lima immediately the next day. I found a place where other travellers were awaiting flights the next day and we all slept together on the floor. About 2:30 am, we were unceremoniously moved by the floor cleaners! I moved upstairs and found another place. Another set of floor cleaners came close but did not move us this time, but by 4:00 am the airport was again getting busy and sleep was impossible. I bought some water, moved back downstairs, and dozed on and off until I could take a taxi to the Cruz del Sur terminal. By 8:00 am, I was too tired and sleepy to read or knit, so when I was not dozing off, I found that it was calming for me to just be a part of the “landscape” and watch all the people coming and going.

The taxi was ungodly expensive for Peru–80 nuevo soles–about $30! But once we were in traffic, I treated it as a carnival ride and marveled at all the drivers’ abilities to create a 4-lane road from a 3-lane one and never run into each other. (Horns being an essential tool for the task.)

Waiting in the hot and humid bus terminal for several more hours, I noticed that at least 3 people were continuously sweeping/mopping the floors. These Peruvians–they like their floors clean! Once I was finally on the bus, I was so glad I splurged and got a first class ticket (only $55 for the 16-hour ride to Arequipa). The bus seat was plush and the cabin was quiet with large windows to see outside. Seeing outside was a mixed blessing. I was glad to see the city and the countryside, but the sights brought on my first attack of culture and environment shock. It has been a LONG time since I have been in a country where poverty is seen everywhere and it is very difficult to take it all in at once. Another difficulty was seeing how stark southwest Peru is in many places. 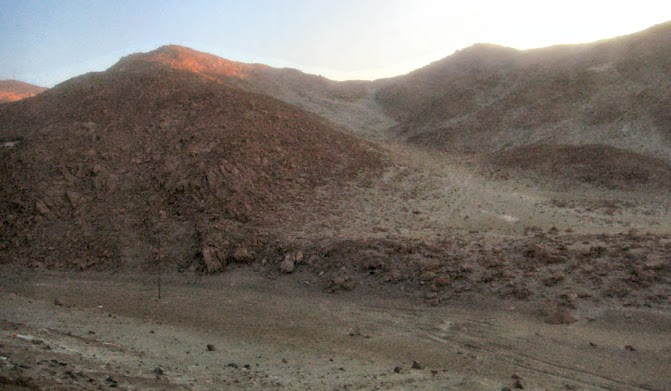 My first view of the Andes:

I was fed dinner on the bus, but was certainly hungry by the time we reached Arequipa at 7:00 am. My host came to pick me up at the station!! The taxi to his home was FIVE soles (about $2). Manuel and Adela welcomed me to their home with breakfast on the table starting with fresh mango! Then came my first nap. 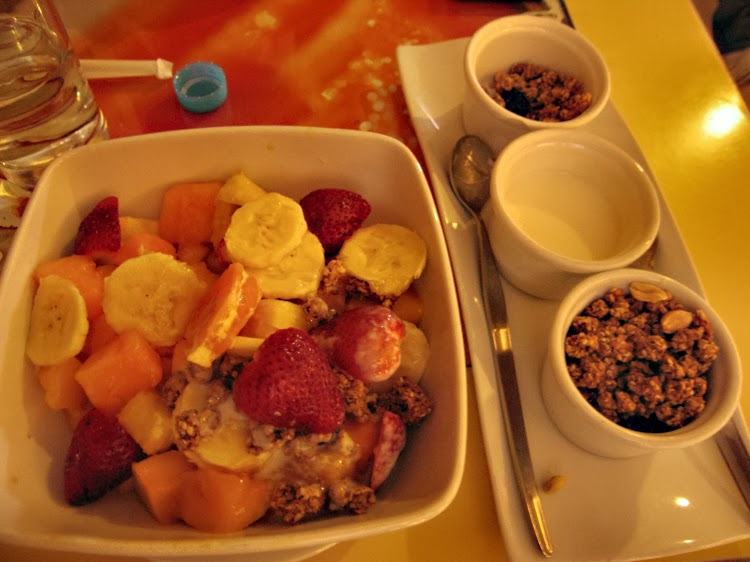 Then, Michell, a visitor from Quebec who lives here temporarily and speaks fluent French and Spanish, volunteered to guide me on my first walk through the streets. It was good I had  guide on my first outing–I felt like a little kid again learning to cross streets where the cars (mostly little taxis) have the right of way. We had lunch at one of his favorite places and I got bowl of fruit with a little granola and yogurt. I doubt that I will tire of fruit in 4 months!

We returned home and I took another 2-hour nap; woke up to join the household for dinner. I did not eat but just sat and listened to the conversation; letting my first immersions in the language do their job. I understood about 10%…

This seems like a very long day! Was it only this morning that I woke up on a bus? And now I climb into what will be my bed for many nights…