Skip to content
(Or How I Spent My 60thBirthday)

For the weekend of my 60th birthday (March 22), I decided to take a little tourist jaunt to the island of Amantani. This is how I spent the second day there—my birthday! 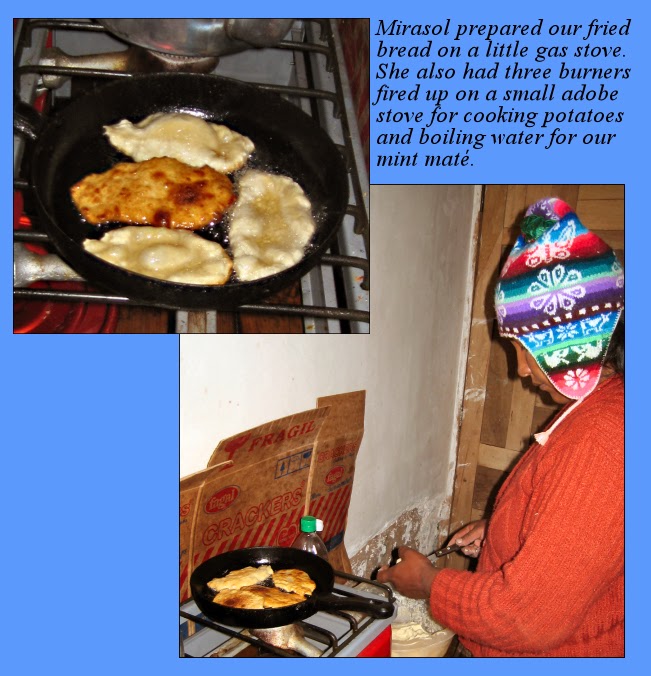 We woke in the morning to a breakfast of fried bread. It tastes just like Navajo fry bread and I enjoyed it plain, although some people sprinkle sugar on it. Both the couples who shared my homestay only stayed one night and had to catch the return boat early in the morning, so they ate quickly and Mirasol escorted them to the port. Artemio soon left for a painting job in a nearby building. Meliza and Yheison and I went to the plaza. The children played with a ball and I walked around examining the buildings. There was hardly anyone else around.
I decided to pack my shoulder bag to take a walk around the village for an hour or so. I always carry my camera, water, sweater, and some food—just in case. I started uphill toward the walkways to Pachamama and Pachatata, the two highest  points on the island. Pachamama is the fertility goddess on whom the Quechua depend for good harvests.  Once I started up the hill, I decided to try to go all the way up to Pachamama, the higher of the two hills. The walkway was paved in stone all the way up to the top of each hill. The hillsides are terraced and planted with wheat, barley, quinoa, potatoes, oca, and havas (fava beans). This is the season for harvesting potatoes so many families were walking up to their fields, some leading burros which would graze all day and then transport the harvest down to the village.

I was stopping to catch my breath about every 100 feet or so, enjoying looking around at the view. One old man (79 years old—I later learned) asked about who I was and where I was from as he passed me up with his burro. About halfway up, I was getting a bit fatigued and realized that I needed my coca leaves, but had left them in my room. The about 10 minutes later the same old man walked over and sat down with a bag of coca and offered me some! Amazing! He told me I only (!) had to pass through three more archways and I would be at the top. I could see them above me. We talked a bit more and I continued up the walkway.

The view at the top was worth the walk! The sun was warm, so I sat in the shade and dozed on a stone seat for a bit before eating the snack I had brought. I had not originally planned to walk so far, so I had to ration my water for the trip down. Not a sole was there and I remained at the top of Pachamama for about an hour enjoying the quiet, taking pictures, and realizing that I was celebrating an incredible 60th birthday!

Soon after I began my descent, I ran into a woman walking up. She jokingly held out her hand asking for help up. We laughed I took it and pulled her up the hill a few feet. She asked if I had any water and I offered her my bottle. I was surprised she did not have any since she was going to the top of Pachamama to harvest a special kind of potato there. But it was a nice trade for the coca leaves the old man offered me earlier. We talked for a while and laughed over the fact that she was 43 and already had 3 nietos (grandchildren) and I was 60 and had none. She looked to be about 30!

A bit further down and I saw an old man harvesting potatoes. I called over “Muchas papas!” It was the same man who had shared his coca leaves with me earlier. He stopped and walked over and we talked a bit about potatoes and where I was from. His wife walked up and he introduced her as his senora. She looked even older than he did, but may have been a bit shy because she did not stop to converse. He introduced himself as Torebio and wanted all my contact information to send to a friend of his who lives in California. 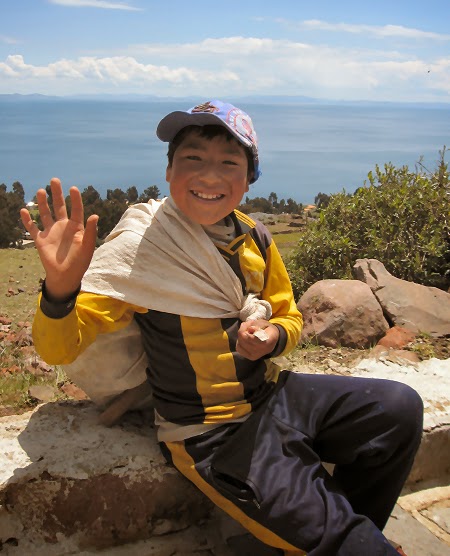 A bit further down, I met a family coming up who knew my host family and we talked for a while. The father was delighted to talk. His wife would ask him questions in Amayra which he relayed to me in Spanish. (It is not uncommon for these remote Andean women to not speak much Spanish.) Their son was 11 years old and had such a sweet smile that I just had to get a photograph.

The little hour-or-so walk I had started ended up being a 3½ hour hike. Although it was only about 2.8 miles, at this altitude (4100 meters at the top), I considered it an accomplishment!
I got back to my homestay casa about noon and it was a good thing I did. Earlier in the morning, Artemio had told me that lunch would be at dos (two)—or at least that is what I thought I heard. He actually said doce (twelve)!  It may have been rude to show up so late. Mirasol and Yheison had gone to harvest potatoes and responsible little Meliza had lunch ready. Artemio came home for lunch and we talked for a bit while we ate our barley soup. I commented on what a good cook she was and said that if I bring my daughter to Amantani, they could cook together! She smiled and served more papas. 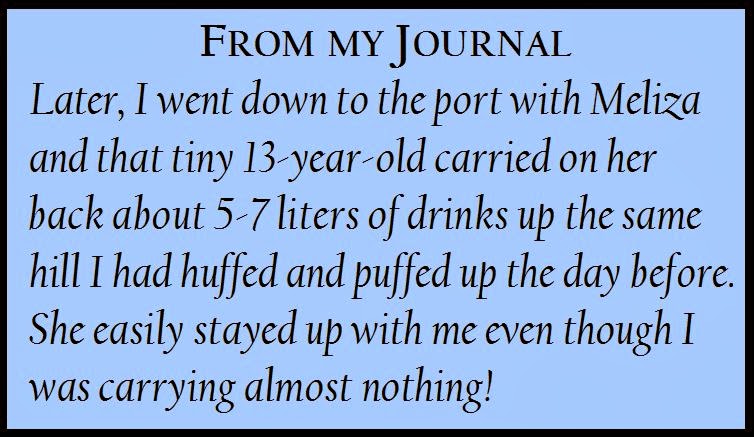 Altitude + Hike + Hearty Lunch = Siesta so I took a short nap before accompanying Meliza down to the port for her to buy drinks to sell in the family tienda (store). When we returned, Meliza told me to bring my knitting down to work on while she cleaned the store. She dusted all the shelves and merchandise and window sills and swept the floor and then sat down to practice spinning again with the Andean spindle and alpaca fiber I brought.
The tienda faces the plaza and there were some young men outside on the steps. Meliza and I moved outside to sit near them. I asked if they could spin. Freddie, sitting next to me smiled broadly and said yes and he started using the little Turkish spindle while his friend tried out the one that Ben made me. Both of them had made their beautiful chullos with colorful mariposas (butterflies) on them. Beautiful knitting they had done with the floats in back tied down perfectly. Meliza told them I was making a chullo, so I had to go get my flimsy excuse for color knitting to show them. (Lace is my specialty) I complained about how bad my floats looked and asked him to show me how he knits. He very patiently showed me the Andean method of knitting—running the yarn behind my neck and using my thumbs to wrap the yarn around the needles. (Unfortunately, I was not “all thumbs,” but “all fingers and thumbs” and very clumsy. I will need much practice to master this new method.) Freddie and his friends wished me “Feliz compleanos!” and went to play volleyball—a very popular game here. 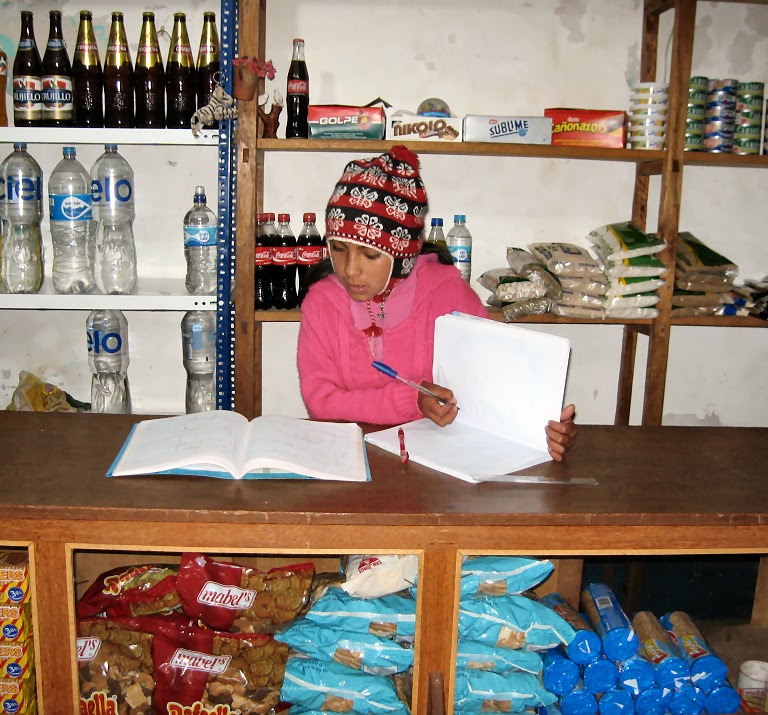 It was getting dark and cold so Meliza and I moved inside the store. She worked on some math. (Math is her favorite subject.)  School would not even begin for two days and she was already studying her math! I told her that math had been my favorite subject in school, too. The store closed about 7:00 and we went upstairs to eat dinner. I told them that I only had room for soup, so Mirasol put the pasta in the soup! It really hit the spot—so warming and hearty! Again, we went to bed early. Mirasol had been working hard all day and it was apparent she was very tired.

During both nights that I was there, we had violent thunderstorms, with lightening and thunder clapping right over our heads. But I went out to the bathroom after one of the storms had passed and the stars were brilliantly clear.

And that is how I spent my 60th birthday. Who could ask for more?