Skip to content
While knitting last Sunday with the women in Chucuito, I told them I was looking for lana de alpaca (alpaca yarn). They told me I had to go to the feria de domingo (Sunday fair or market) in Acora another small pueblo about 15 kilometers south of here. That meant I had to wait an entire week! Well, I made it to Sunday and took a combi (minibus taxi) which dropped me off literally right in the middle of the market.(The market is situated on both sides of the highway that runs through town.)  I was told to get there early and I had assumed that the women would sell out and go home if I did not get there soon enough. Well, it turns out, since I arrived before 8:00 am, that many people were still setting up. I walked around and saw LOTS of colorful acrylic yarn, but no natural fibers at all. Oh no! Was I to be disappointed again?
At the top of the market, I saw bunches of people each consisting of several women gathered around one person—all clamoring for the person’s attention.  How, I thought, do I figure out what they are doing without interrupting? Well, after watching for a bit, I figured out that they were selling their bags of handmade finger puppets to the wholesalers! Those puppets would mostly be exported to Europe and the US.
I bought some bread and sat and waited a while, thinking maybe the alpaca women really did not arrive until a bit later. I encountered a man who was waiting for his wife and he asked me the typical questions (where was I from?  how did I like Peru?   have I been to Cusco?). I told him I was looking for lana de alpaca. He started to tell me where to find it, but when, not understanding, I kept asking if I needed to cross the street, he and his wife walked me about 200 feet to where a woman sat on the ground with not only her raw fiber of many colors, but also her hand-crafted husos(spindles) for sale. WOW! Here I was! I thanked them profusely and knelt down to examine the fiber and spindles. Her name is Graciela. Gradually more women joined her in specific locations on the sidewalk. I picked out a half-kilo of gray fiber (she weighs it on a little hand scale) and a medium sized spindle and started spinning. She picked up another batch of fiber and, by example, gave me some pointers. 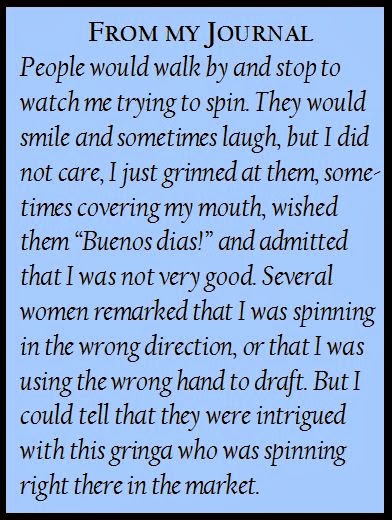 (Okay, I’m going to get a bit technical here, so if you are not really interested in the hows and wherefores of handspinning, you can skip to the next paragraph.) Until today, I have only used drop spindles. The spindles that most women use here are mainly meant to be used in a supported fashion. (The bottom point of the spindle rests on the ground.) The technique is a little different from what I am used to. For example, you don’t have to tie a half-hitch at the top of the spindle between each section of  spun yarn. But I am so used to doing so, that sometimes I would absentmindedly add a half-hitch and then forget to undo it, creating a knotted mess on the spindle. On top of that, I had been plying yarn for the past several days, in which you turn the spindle counter-clockwise. So, I forgot and started spinning to the left. On top of that, I usually draft the fiber in my right hand and spin with my left. Well, immediately, Graciela noticed that I was spinning in the wrong direction, but I had already started, and did not correct myself. (I should have!) She also, kept trying to get me to draft with my left hand. I did change hands for a while, but it was kind of  like trying to write left-handed and I kept dropping the spindle, so I eventually switched back. I have been very spoiled in the past using fiber that has been cleaned and combed. This was raw fleece, with bits of vegetation and small mats of tangled fiber that had to be cut out. Yet another challenge for me, but I persevered. Graciela gave me tips, and watching her spin was very helpful.
I enjoy showing the women the spindle that Ben (my son) made for me and the little Turkish spindle I have. They are impressed with Ben’s spindle and intrigued with how the Turkish spindle automatically makes a pull-skein. 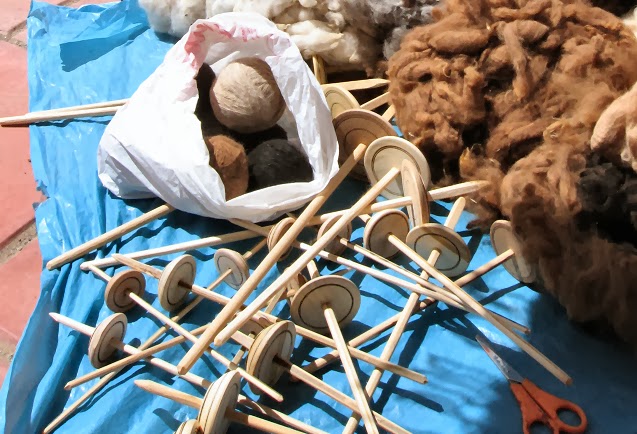 I worked on the yarn for about 2 hours sometimes talking with Graciela. She has 30 alpacas and lives near Puno. She is at the Acora market every Sunday in the same place. Occasionally, while we were working a woman would drop by and purchase some fleece from her. My half-kilo cost 7 soles and the spindle was 2. When I was ready to leave, I paid Graciela and added 3 soles, “por su ayuda” (for your help) and she was delighted.
Before I left the alpaca ladies (for, by now, there were six or seven of them) I strolled by the other vendors and one gestured that she had seen me spinning, so I dropped down and showed her what I had done and my other spindles. Her husband and teen-aged son were there and they, too, were intrigued with my spindles and smiled broadly as they examined them.  Her husband makes spindles. She took the one that Ben made and spun a little yarn with it using it as a drop spindle, the way I do.
I will be back next Sunday, after having practiced—turning the spindle the correct way and maybe trying again with opposite hands. I have my eyes on some jet black fleece to go with this gray. Hmmm, I think I will need another suitcase when I return to the US! 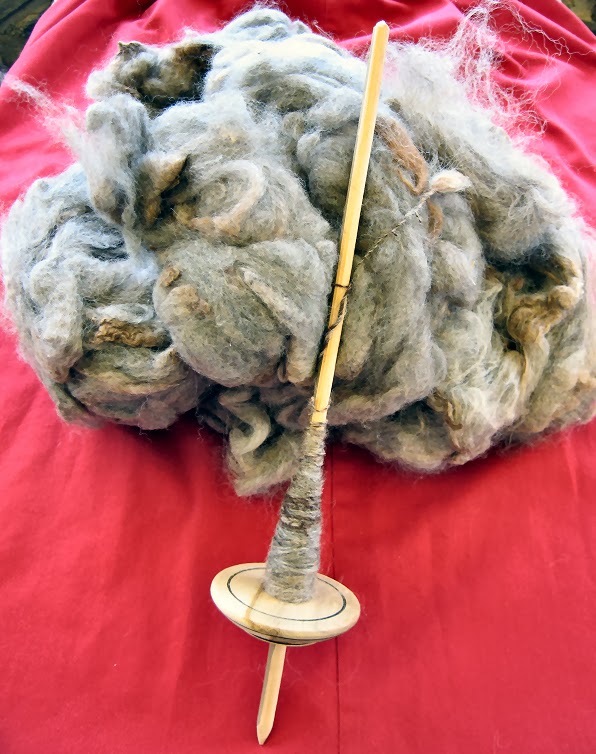 4 thoughts on “Fiber: Chapter 4: The Alpaca Ladies of Acora”