The tiny pueblo of Chucuito (about a 30 minute combi ride south of Puno) is well known for the arches you see everywhere—a remnant of Spanish Colonial architecture. I walked around the village photographing many examples of the arches and put them together in a slide show:


To get used to moving around at this altitude, I try to take a walk daily around the village and countryside. I usually run into someone to stop and chat with. On March 13, however, my walk (more like a hike) took me up to a mirador (overlook) above Chucuito. I have no idea of how far it was, but it took me 3½ hours round trip and I was walking VERY slowly. I learned later that I climbed about 1000 feet above the pueblo, which put me at 4100 meters above sea level! The altitude here is nothing to scoff at. Altitude sickness can be deadly for some people. But once you have been here a couple days with no real problems, you can be fairly confident that it is possible to begin slowly to adapt. I walk slowly everywhere, and I notice that, except for the young, most local folks also walk slowly. (Of course, oftentimes, the women are carrying quite a load on their backs!)

As I began my hike, I noticed that I was just a tiny bit lightheaded, so after a bit, I decided that some food might help, so I found a shady spot and ate the lunch that I had been saving until I got to the top.
However, even after eating, and walking a bit more, I still felt lightheaded, so I got out my coca leaves and chewed a few, stuffing the remains between my cheek and gums as is customary. I decided that if the coca leaves did not help and if I continued to feel worse or began to not think clearly, that I would abandon the hike, especially since I was alone on that hillside. Although I had told my host where I was going, no one would really miss me until dark—and it gets really cold after dark! I did not want to do anything stupid! I continued walking and interestingly—and thankfully—I began to feel better and the lightheadedness dispersed.

Despite having help from the coca, this turned out to be one of the most difficult hikes I have ever done. But every step higher empowered me to continue. I paused to catch my breath every 20–30 feet or so. The trail I was on disappeared and I had a bit of a time finding the best way to the mirador. You cannot really get lost, because the countryside is very open and you can see Lake Titicaca and the villages the entire time you are hiking. You could always figure out how to get back somehow. But I really wanted to make it up to that little mirador! As it turned out, I went the long way around and came up the back of the lookout. At one point I scrambled up a small dry cataract, with some concern about how easy it would be to scramble back down.
With a bit of cross-country travel, I finally made it to mirador. And when I got there, what did I see? More arches! 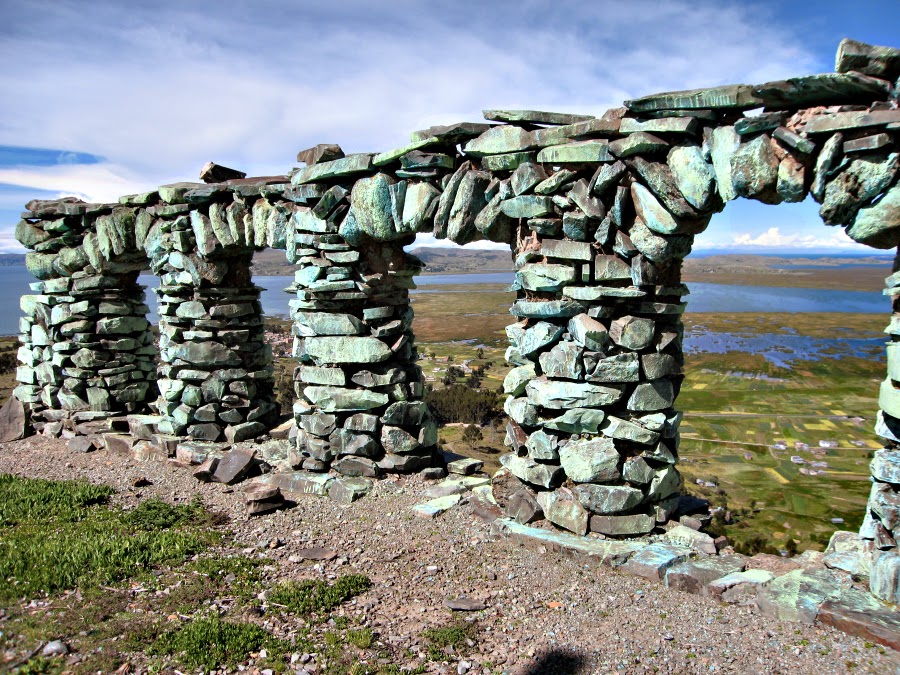 But look at these arches! I know people have been building arches like this by hand and without mortar for thousands of years, but the skill involved in selecting just the right rocks and setting the keystone always fascinates me. 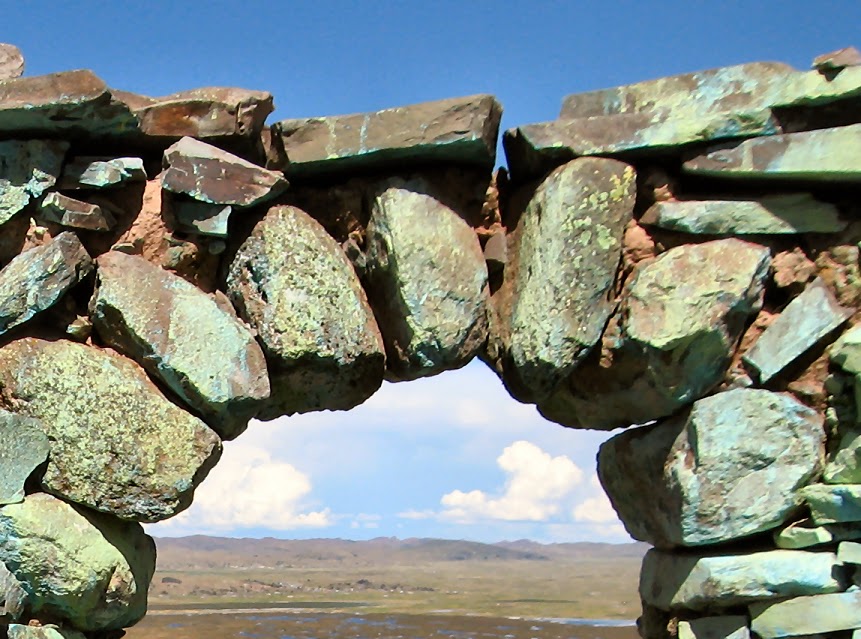 At this point, my legs were a bit shaky but not too much so. I was taken away by the view and my accomplishment. It was windy and cool, so I could not rest long, but I did remain long enough to enjoy the euphoria of being there.
Refortifying myself with more coca and lots of water, I began my walk down, which I knew would be torturous for my knees. Lo and behold, I found the trail that most people take to go up. It was very clear! However, it was also much more steep. In taking the long way around I had pretty much traversed the hill in one big switchback, which made it easier to climb. The route down was also more difficult because the rocks slipped around under my feet and shaky legs. Fortunately, I had had the foresight to bring my trekking poles with me. They probably have save me from a nasty fall or broken bone. Even when I was young, I was never very sure-footed. When I hike with Rebecca, she is always nearby to give me a hand up or (more often) down. I laughed as I thought to myself, “In lieu of Rebecca, I have my trekking poles!”

Afternote: My knees survived, possibly because as soon as I returned, I took some Ibuprophen. They were fine the next day. Pretty good for an almost 60-year-old!