One day a couple weeks ago I asked my host, Adela if she knew how to make tamales. “Claro!”—of course she did. Since I also like to make tamales and wanted to make some here from the foods I could get in the market, we planned a day for shopping and a day for making. 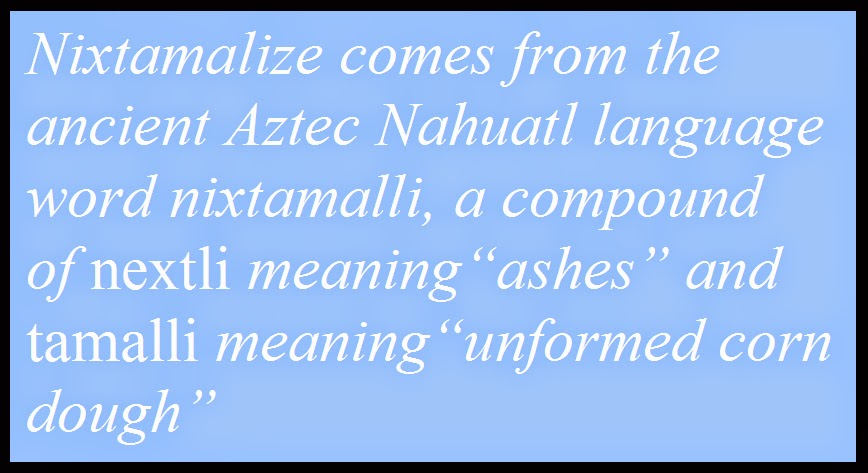 I have never made the masa (dough) from corn, but here  you can buy the prepared maiz pelado para tamales in the feria, another mercado down the road. Maiz pelado refers to the fact that the corn has been “nixtamalized.” This means that it has been soaked in a lime solution (the Aztecs used wood ash) overnight and the husks have been removed  or peeled (pelado).
Nixtamalization results in a more flavorful and softer masa, increases the availability of niacin and protein, reduces the harmful micotoxins,  and makes it possible to form a dough that can be made into tortillas and tamale masa. How the ancient Central American people figured this out is amazing to me. 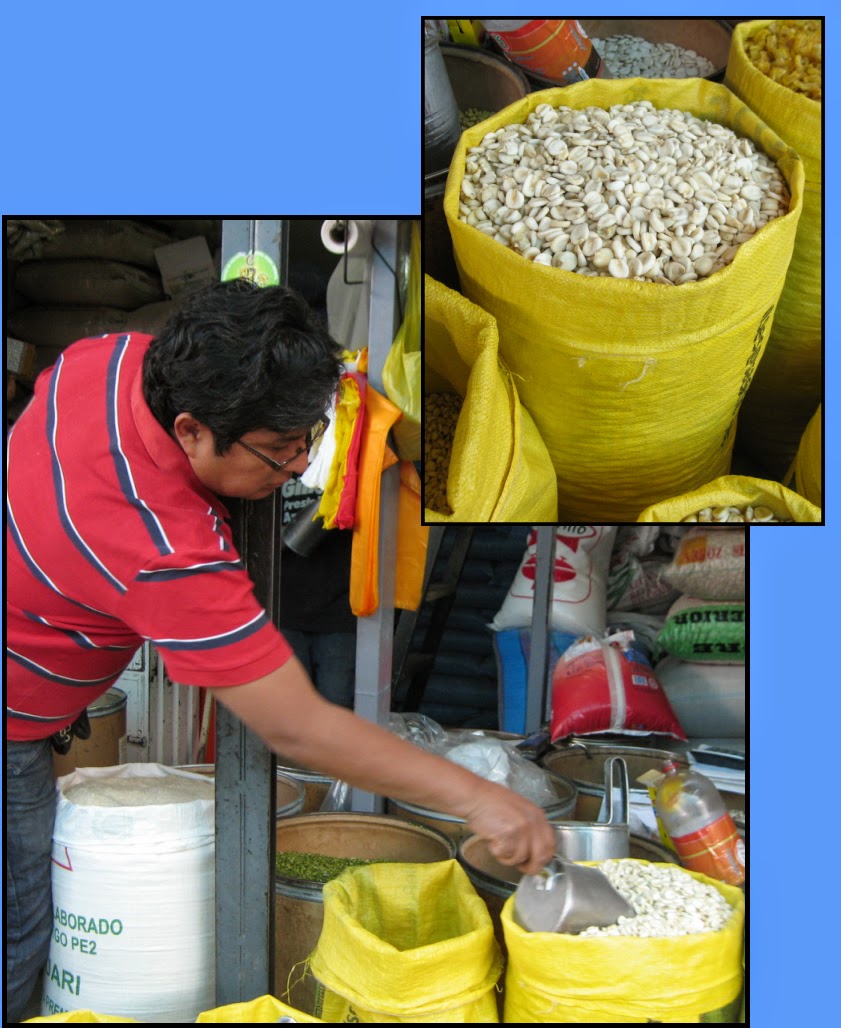 On Thursday, we went shopping at a mercado that seemed like a maze, but Adela wound her way through it like a master. She went almost to the back of the market until she came to the little shop she was looking for. They sold all kinds of grains and had the maiz pelado we were looking for. We decided on a kilo. From the same shop, we bought some whole cumino seeds (indispensable!) and some raisins (for the sweet tamales I planned to make as well).

Adela was also buying some pork at the market, so while we were waiting for the pork to be weighed, Adela noticed that in the glass case, they had little bags of pork lard! Perfect, we needed that for the masa so I bought one of the larger bags—a little over a cup. That lard turned out to be much softer than the lard I am used to and it was hard to whip air into it to make a light masa.

Our next stop was the chicken shop. This was outside the mercado and on the street. In Peru, there is a chain of stores called RicoPollo that specialize in chicken products. You can find one every few blocks in the larger cities and there is usually a line of customers out the door. I found out why when we got home with our chicken—it smelled as fresh as any of the chickens we used to slaughter. Fresh, fresh, fresh! 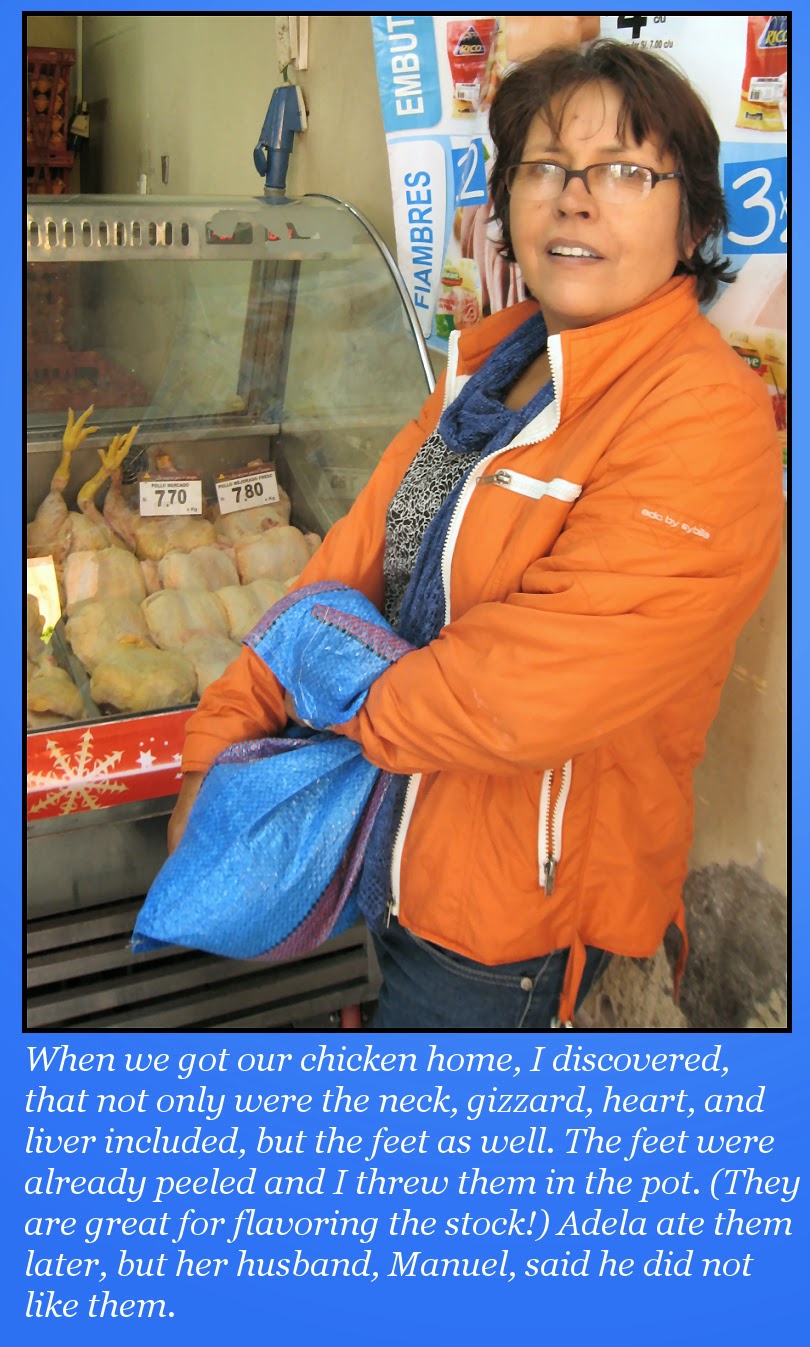 There was a bit of a line, so while we waited, I snapped a photo of Adela and the chickens we were waiting to buy. That was all we needed from that market. It was a good thing Adela was my guide. I would have gotten so distracted by all the stalls, that I would have never made it home. We jumped on a bus and came home. Later, Manuel and Adela went out and purchased some red bell peppers (aji colorado) and apples. They also got a bunch of choclo or “Peruvian corn” which is kind of like our hominy, but is purchased fresh on the cob. I never found a place that sold just the corn husks and Adela said that we would use the hojas (leaves) from the choclo. Those leaves turned out to be huge—I could fit two tamales on each leaf. Also, they were fresh, so we did not have to soak them to make them soft like you do to dried corn husks we buy in the store.

Okay, with these purchases and Adela’s larder, we had everything we needed. On Friday we would get to work!

My plan was to make a batch of chicken tamales and a batch of sweet tamales with the apples and raisins. I started out by stewing the chicken with onions, garlic, and celery. Then, after it cooled, I pulled away the breast and reserved it for the soup which would accompany the tamales. The rest of the chicken got chopped up and then sauteed with more onions, peppers, chopped olives, oregano, pepper, salt, and the roasted, ground cumin seeds. (Toast the whole seeds in a pan until the whole kitchen smells like a Mexican restaurant, then grind them in the blender.)

Now we were ready to make the masa! But FIRST came the tedious work. Adela had soaked the maiz pelado overnight and now we had to remove the tip caps from each kernel. I think we did this to make the masa softer. I have never made masa this way—I always use masa harina (dried flour masa).

Finally, we were ready for the molino (grinder). Now was Manuel’s turn to help. He set up the grinder on the counter and started to grind the soft kernels. It was hard work and he had to keep changing arms. I was glad that I only had to help feed the corn into the grinder. The result was a soft, damp meal that looked and smelled a lot like ground soybeans. 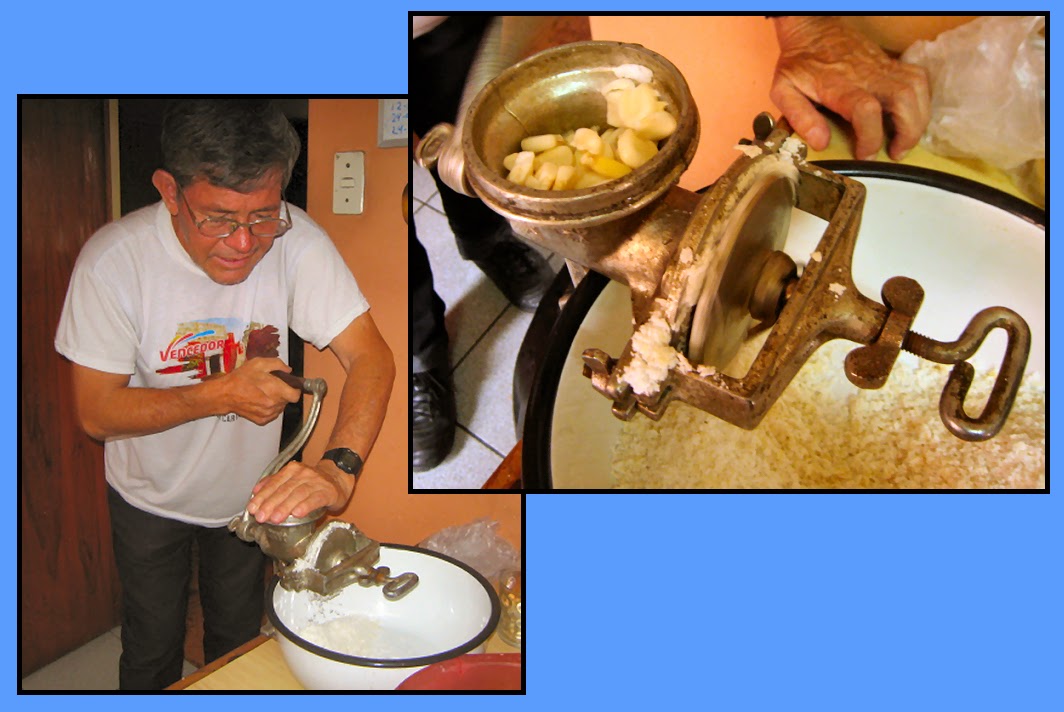 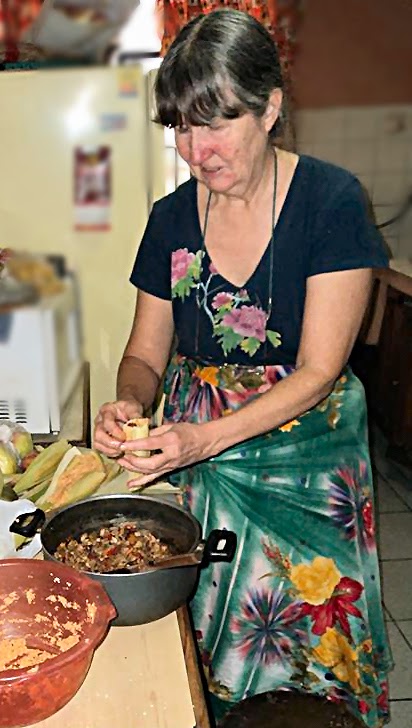 I then whipped the lard with baking powder and salt. I did not have a good way to measure, so I just scooped handfuls of the corn meal into the lard, and added a little bit of chicken stock at at time. Then the seasonings: lots of ground toasted cumin, pepper, garlic, oregano, and a paste of chilis that Adela had in her freezer. Whip, whip, whip! Finally, it looked, felt, and tasted like masa I was used to. Now to assemble everything onto the hojas, roll them up, and pop in the steamer for an hour and a half!

I also made some sweet tamales by cooking up apples and raisins with sugar and cinnamon and then using them for filling another batch of masa that used apple juice, sugar, and cinnamon instead of the savory flavorings.

Adela and I added some carrots to the chicken stock and then put the chopped chicken breast back into the pot along with some angle hair pasta. The result was a light brothy soup just right for accompanying the heavy tamales.

Annie, another guest, popped down to the local tienda for some cervesa and we were ready to eat!