This is a rather lengthy post, but it has an interesting ending which relates to the purpose of my Camino—to reflect on the things in my life for which I am grateful.

I had thought that since it was raining a little as I left the Cóbreces monastery, and because I planned for it to be a short day, and because it is easy to think about being grateful for shelter, that is what I would choose today—to think about how much gratitude I have for the shelter in my life.

The day started fine, if a bit rainy, and the kilometers to Comillas—my short-day destination—melted away. I arrived in the quaint coastal tourist destination by noon and I decided to go on to the next town with an albergue. I had been told that the large albergue (another name for hostel) in San Vicente was closed, but I was armed with the names of two albergues in Santa Marina and La Revilla which were just before San Vicente.

As I approached the two or three buildings that marked the village of Santa Anna, I was doing fine—only two kilometers to go and I would still be stopping early—by about 3:30. I thought about how I would get a chance to catch up on blog posts and get to talk to Ben and Rebecca.

After I had walked for about an hour past Santa Anna, I was cussing my guidebook. I know I walk slowly, but surely it was more like 4 or 5 kilometers to Santa Mariña! And now I was starting to flag a bit. “Oh well,” I told myself, “the hostel (shelter) would be that much more appreciated.”
During the day, I thought about how grateful I am in my life to never have had to worry about whether I would have a roof over my head and a warm (usually warm) bed at night. Of course, I have occasionally slept in the elements—by choice. But I have never worried that the cold might go on forever. And thus my gratitude. Not everyone in the world has such luxury.
When I arrived at the next intersection, it was NOTHING like the guidebook described—NOTHING! I kept looking for the yellow Camino arrows, then at the highway signs at the intersection roundabout, then at my guidebook. Where in the hell was I???
After much studying, I figured out that I had taken a wrong turn right after Santa Anna and the intersection where I was standing was off the guidebook’s map. I sat down on the grass in the middle of the roundabout and as the cars circled me, I ate a snack, tried not to cry, and figured out what to do. Since I was “off line,” I could not consult Google maps, so I had to guess whether it would be shorter to go back or to take another way back. I chose “the other way” and later discovered it was the right decision. At least this busy highway had a shoulder on the left side of the road.

Now, “flagging” was a nice word for how I was feeling. My calves were burning with every step—I had been on pavement all day for over 14 miles carrying about 20 pounds. After walking back the one kilometer, I found that albergue to be closed. I asked a woman who lived at the albergue about the Llambes albergue (the other one I had heard about from pilgrims who had recently stayed there) and she disgustedly waved back toward Santa Marina saying it was two kilometers away. So back I went again. I now found some people there and asked about Llambes. One person “knew” and gave me specific directions that were very clear and I repeated them back to him: “Go to the next street, turn right, and then left at the next street and go down until the street ends and the albergue would be on my right.”
OK, off I went. All I found were street lamps that looked like they came directly out of Narnia and empty fields and a road that ended with an electric fence across it, and lots of cows and pampas grass. The road circled around on itself and back I walked to the highway (yet again!)
Okay…time to bite the bullet and go on to San Vicente. I was so tired, but I could not sit down because when I got back up my hips and legs and feet went into shock. It was now 6:30 pm and it was about now that I remembered that today’s gratitude was for shelter…
…AND….I….COULD….NOT….FIND….ANY…
Was tonight to be the first time in my life that I would sleep in the elements without choosing to do so? I eyed an old open milking shelter as a possibility, but I had two hours until dark. So…I crossed the long bridge into San Vicente.
I decided to check the Albergue de Peregrinos just to make sure it was closed, but it was hard to find. I encountered two other peregrinos who were staying in a hotel and they offered to help me find it since they spoke Spanish and English well. We kept getting conflicting directions, but we finally found it way UP the hill by the church. The woman helped me by pushing on my backpack when we climbed hills and we laughed! It amazed me that I still had some laughter inside me.
Yes…the albergue was closed for fumigation. Oh—that pestilence of the Camino—bed bugs! (But, at that point, it would have been tempting to stay there anyway.)
I had the name of a pension from my guidebook. I would have to bite my frugal bullet and spend over 25 Euros for the night. My fellow pilgrims helped me find the pension in the middle of town and we hugged goodbye and wished each other “Buen Camino!”
I stepped inside the pension. Delicious aromas from the kitchen assailed me. Alas, the pension was full. The host directed me to another place, but my brain was too tired to translate what she was saying. I had seen signs for other hotels and trudged to the first one 100 meters down the road. It was 55 Euros for the night. I was just too stubborn for that.
“Lo siento,” I said, “Es demasiado.” (I’m sorry, it is too much.) The clerk kindly indicated the next hotel—another 700 meters. 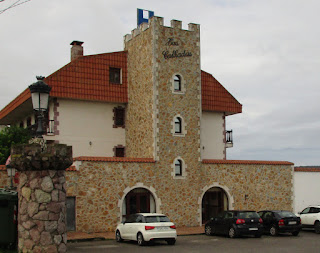 It, too, looked expensive from a distance, and in the dark I started looking for likely sites to curl up in my sleeping bag and hope for the best—that is, no rain. But what did I have to lose?

When the clerk said “30 Euros,” I took it without blinking. In a flash, I had my own private double bed en suite with a BATHTUB! A bathtub AND hot water! 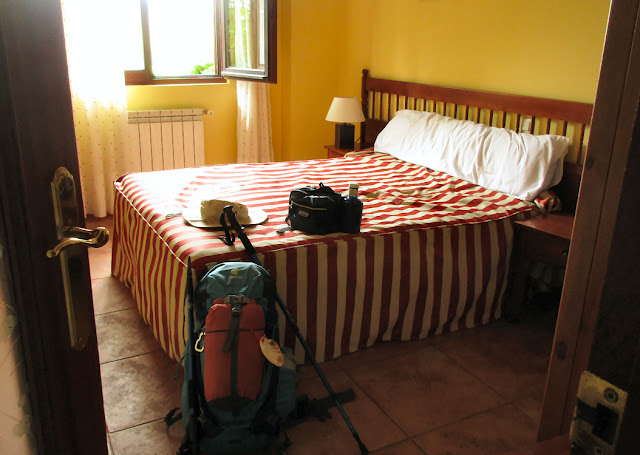 How my circumstances changed in so short a time—and mainly because, in reality, I could afford to spend 30 Euros to soak my muscles in hot water and to NOT sleep outside with cows.
How do I summon up enough gratitude for that? I don’t know, but I think it will be a while before I choose to be grateful for having enough to eat.