Note: This is a camino of gratitude for me. Each day, I choose something
I am grateful for in my life and think and journal about it throughout the day.
I will share an excerpt from my journal entries at the end of each day’s post.

The days are feeling more fall-like with cooler days and nights, but fair weather is holding and it is quite comfortable for hiking. At least once a day I come across bursts of orange in fields and gardens, reminding me of home. 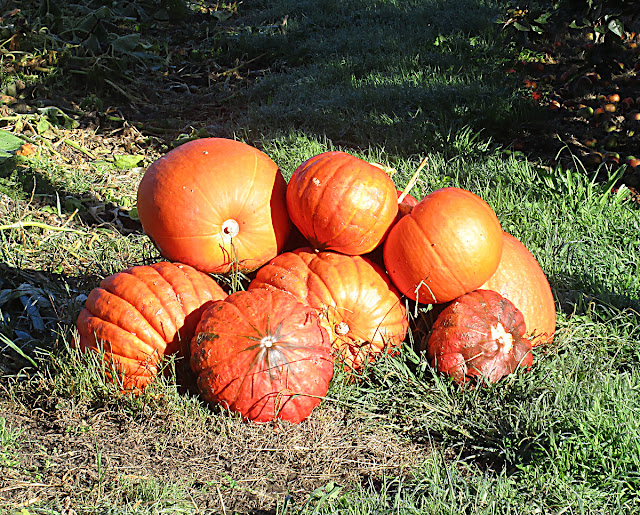 In the mid-afternoon, I got what would be my last look at the ocean before turning south. I would not see salt water and pounding waves again until I finished my Camino a month from now.

I walked through the little town of Sabrayo and a man was sorting through apples in the back of a truck. He handed me one and I sat down on a bench to eat it—tart and crunchy—just right.

As I approached Villaviciosa, a reasonable size city and my stop for the night, I came upon advertising posters for private albergues. These are different from the municipal albergues in several ways. Municipal albergues tend to have more basic amenities, only dormitories (no private rooms), and they rarely have internet access. They are generally much cheaper, some even asking for just a donation. Only peregrinos are allowed to stay in municipal albergues and they can only stay one night. They usually run on a first-come/first served principle and rarely allow reservations. The privately-owned albergues can run the gamut from very basic and/or not so clean to quite, comfortable, even hotel-like and most offer private rooms as well as dormitory beds. They are generally more expensive, starting at about 10 euros. These prividos, as they are called, allow anyone to stay and you can stay as long as you wish. Reservations are usually accepted.

As the peregrino approaches some of the larger towns and cities, s/he comes across competing advertising for the prividos. If I have not already made my mind up about where to stay, I often use my tablet to take photos of the posters for the more interesting-looking accommodations. That makes it easier to find them once I am in town and to decide which one to choose. The main things I look for are: prices, kitchen, wi-fi, and nice photos (although sometimes those are misleading, believe me!)

Villaviciosa is in the heart of cider country here in Asturias—cider and apples are everywhere. On the outskirts of town I noticed this huge orchard. In the background beyond it cideries line the highway.

I was tired and ready to lay down my pack, but as I started to cross the town plaza, I uttered an uncontrollable “Ohhhh!” and stopped dead in my tracks when I came upon this serenely-meaningful sculpture celebrating the versatile fruit. 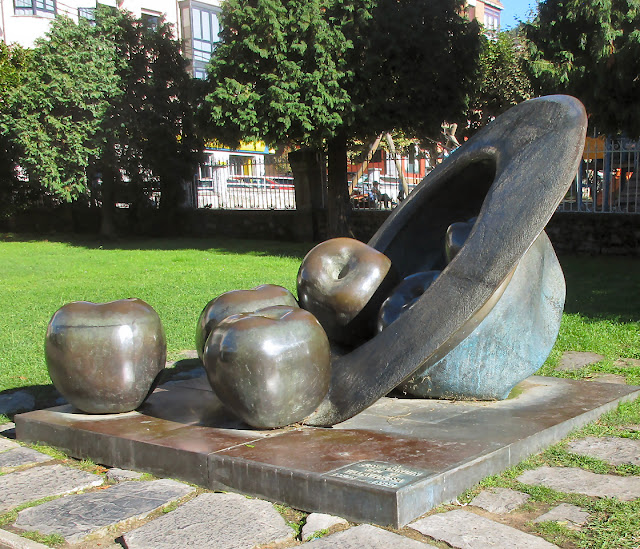 I found the entrance to Albergue El Congreso right off the town square and walked up some stairs to the first-floor reception (Remember, in almost all countries outside the US, the first floor is what we call the second floor. So, if you are given a room on the second floor, you have two flights of stairs to climb at the end of a long day with a pack on your back.)

The receptionist was very welcoming and the old paneled living room and hallways felt warm and comfortable. She did have beds in a 4-bed dormitory for 12 euros a night. But when I told her I would be staying at least two nights, she offered me a private room en suite for 18 euros/night and I took it. Even though it was on the second floor, it was wonderful to have space to myself, no one snoring through the night, no one waking me in the mornings, and a BATHTUB!

Later, in the restaurant next door, I ordered cider to drink and fabada. You may remember that I had fabada, an Asturian specialty, for the first time back in Serdio. It is a kind of bean stew made from fava beans, smoked salt pork, chorizo, and blood sausage. I loved it so much that order it just about every chance I get now.

I was astounded when my waiter very solemnly poured a small amount of cider from several feet above the glass, so that the liquid hit the rim. Most went in, but a significant amount fell on the floor, which apparently is mopped at the end of the night.

I was flabbergasted and had no idea what I was to do with ¾-inch of cider in such a big glass. Was it like wine, and should I taste it and give the waiter the nod that it was okay and then he would fill my glass? Was I supposed to drink it down like whiskey shots? I sipped it little by little, savoring each mouthful. I realized later that the waiter was keeping an eye on me. As soon as the glass was empty, he immediately refilled—but only about ¾-inch each time! So now I decided that I was supposed to savor it. Only later, when I had the chance to look up Spanish cider etiquette on the internet, would I learn that I was supposed to drink the cider all in one go for each pouring—like a whiskey shot—not sip it.

Oh well… The next day, I took a rest day and an opportunity to catch up on some work. I am working on a book layout for a client as I travel and every once in a while, I need to find accommodations that provide wi-fi (which the Spanish people pronounce “wee-fee”) and the option to stay more than one night. This also gives my body, especially my poor hips, the chance to recuperate.

I took a break mid-morning for cake and cafe con leche at the nearby pasteleria, some journal-writing, and to walk around town a bit. 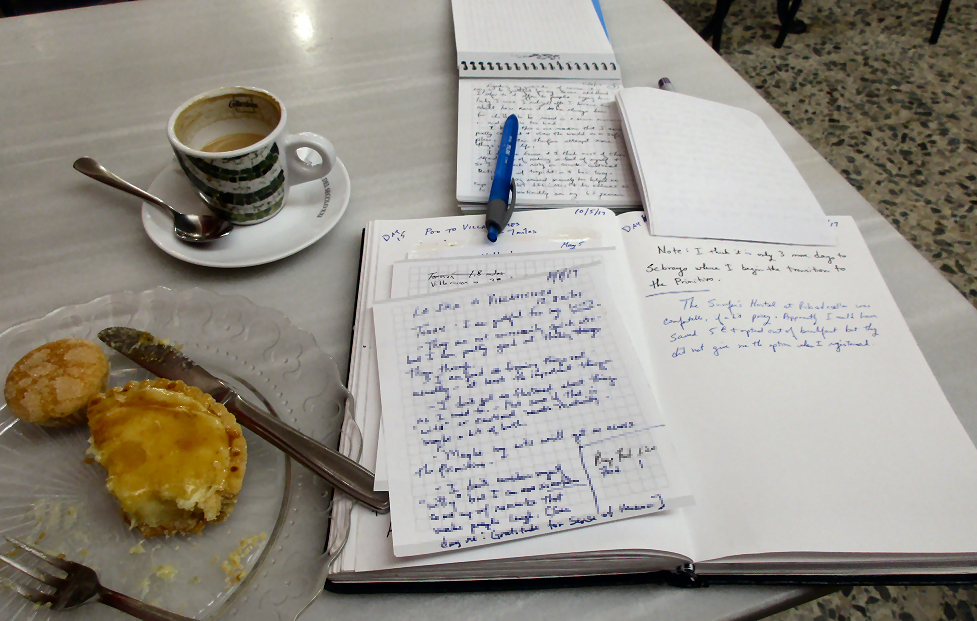 I am close to half done with my pilgrimage. Tomorrow I start on the Primitivo portion of the Camino de Santiago. The Primitivo splits from the del Norte trail just south of Villaviciosa. I will be doing a lot of climbing for the next week or two and expect some great scenery in the mountains.