This was a LONG day, but I got my reward in the end!

Also, it was a beautiful day full of so many different sites that is was hard to record them all.

There have been several times when the Camino takes me under freeways spanning gorges. As I walked among these behemoth legs, I wondered what it must have been like for those dwelling in this little farmhouse when the freeway was being built. 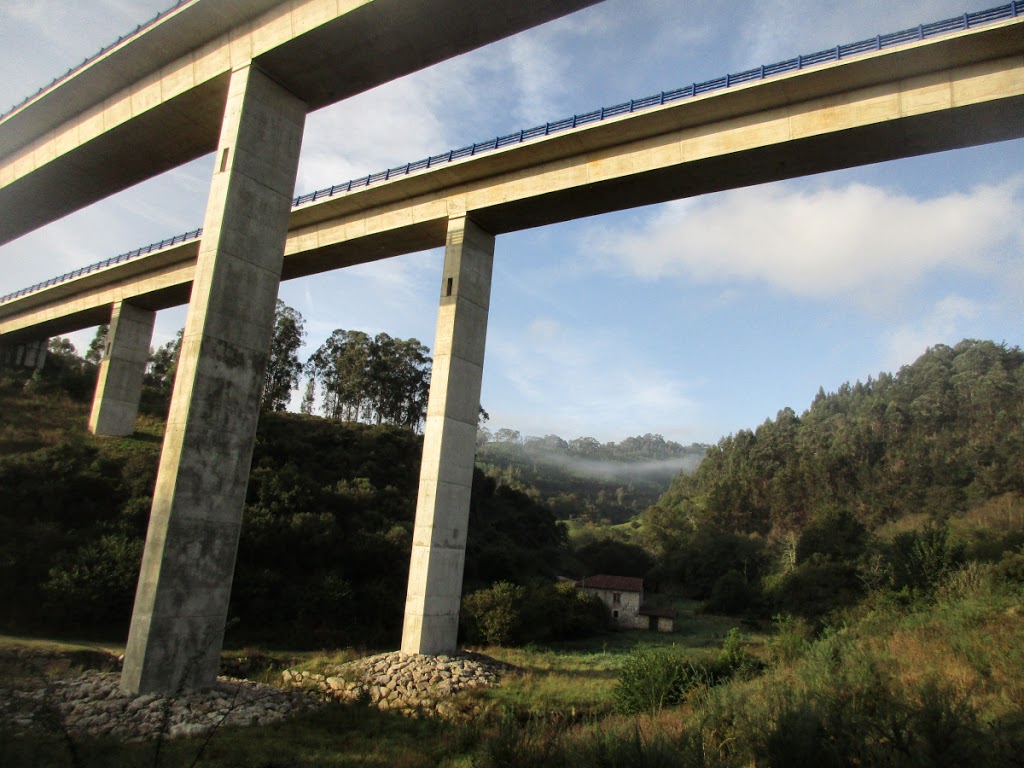 When I was in the UK, it was sometimes hard to find a public water fountain to replenish my bottle, but here, I rarely have to carry a lot of water with me. Many small villages in Spain have these water fountains, and sometimes naturally flowing spring water.

In peaceful Andrin I came across a sweet restaurant where I ordered one of my Spanish favorites: Ensalada mixta, a salad with tuna, eggs, blanched asparagus, olives, tomato. It makes a light lunch so that I can continue walking afterwards. 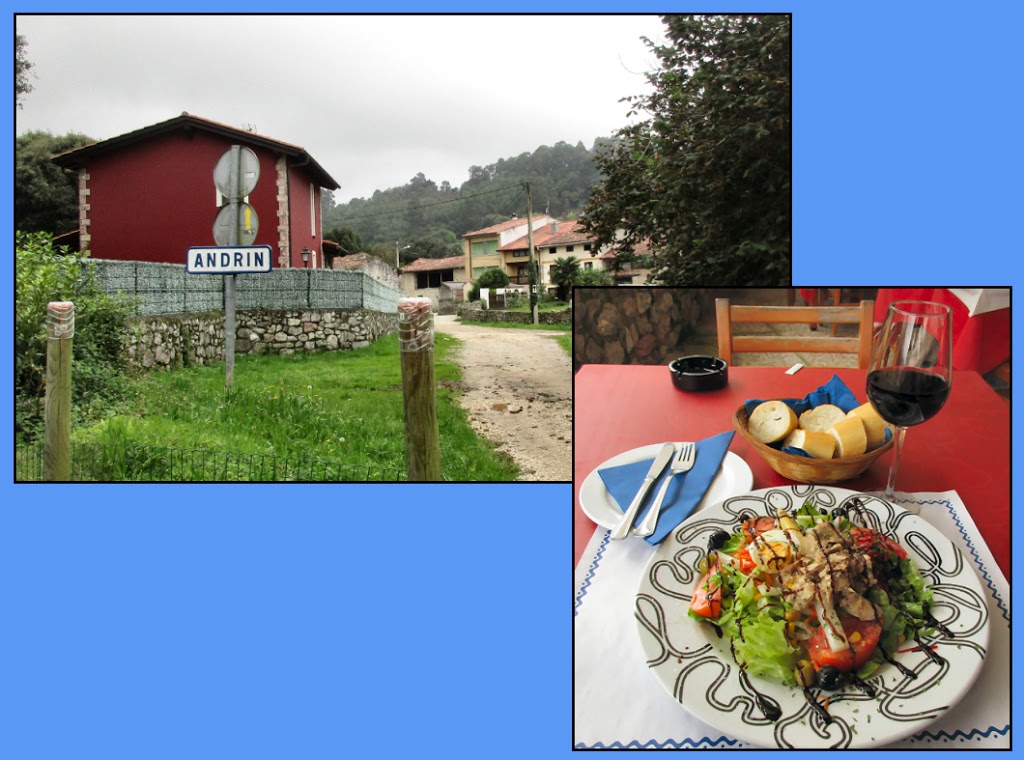 Next to the restaurant was the old village fountain where the women still sometimes come to do their washing. The men say that they really come to habla, bla, bla…

See the sign near the ceiling with a dog with a  line through him? Many of these washing areas prohibit the washing of dogs and cars! I guess children are fair game. 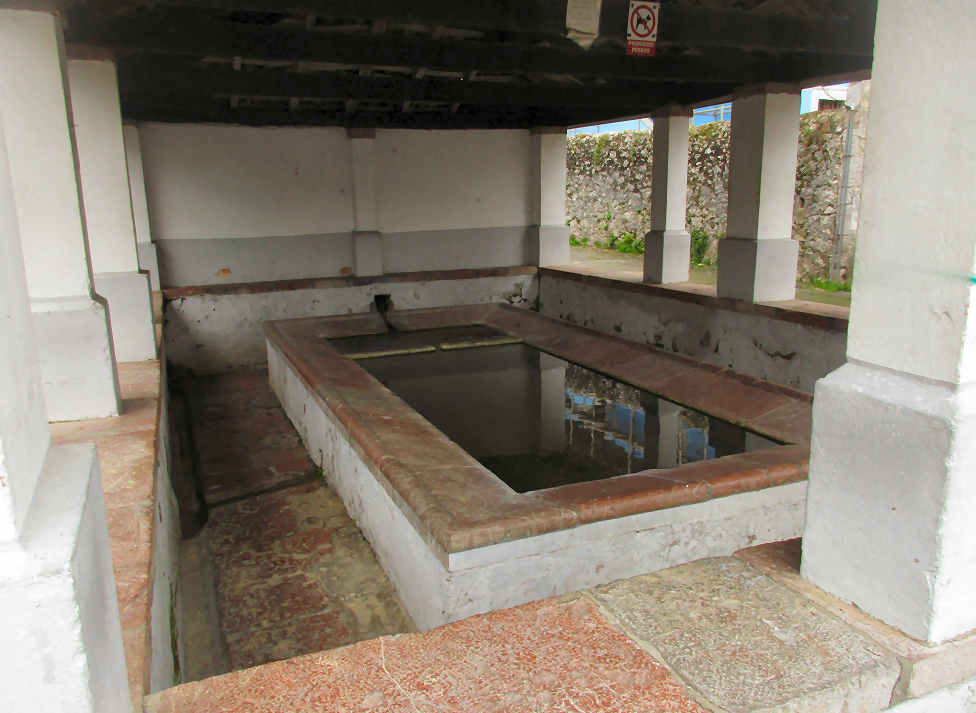 What??? Near the end of the day I walked alongside a golf course. I am not sure that this sign would do any good. By the time you hear the ball, it has probably already bonked you!

After 17 miles, I reached my albergue for the night in Playa de Poo (pronounced PO). It was a bit off the Camino path and I had to ask directions. No wonder I could not find it, I had to go through a very narrow alley that brought me out near the beach. This is actually one of many surfer hostels you find along the coast, but this one also caters to pilgrims.

David, the hospitero, greeted me warmly, and unlike in most albergues who begin the registration process right away, he said, “First things first…Sit down. Would you like tea? Café? He asked where I was from, how my day was and I felt like he was truly interested. I ended up in a room of four beds by myself. It is a good time of year to be traveling here. Most pilgrims, surfers, and vacationers have left, but the hostels are mostly still open, so you aren’t stuffed in a room with 5 or more other travelers.

This albergue had so much character. There was a large back yard including an area for chickens. In the morning, I got fresh eggs from those chickens, along with freshly made jams (including fig jam from their fig tree!), and homemade cake. 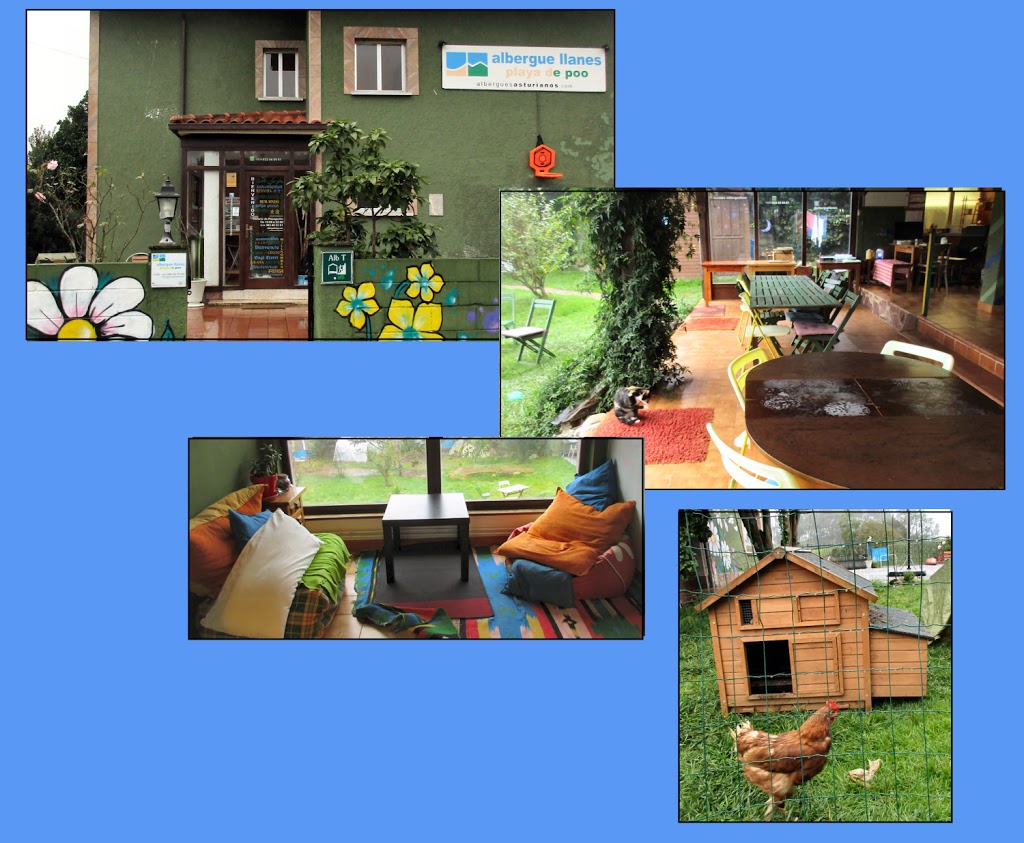 This lovely home had little alcoves for relaxing. I wished that I had taken my rest day here, but the next day I had to move on. This and the albergue at Boo (pronounced BO) are my two favorites so far.  Boo and Poo!

In the morning, it was raining mist, but I wanted to walk down to see the beach and I was so glad that I did, for several reasons.

At first, I was alone and was astounded that the sandy beach and the accompanying cliffs and caves that ran alongside and about a kilometer up the the river that flows into the Bay of Biscay here. The tide was out, so the river meandered through the sandy canyon bottom. Later that day, I would encounter more of these kinds of beaches, which I called alluvial beaches, although I am not sure that is an accurate term. 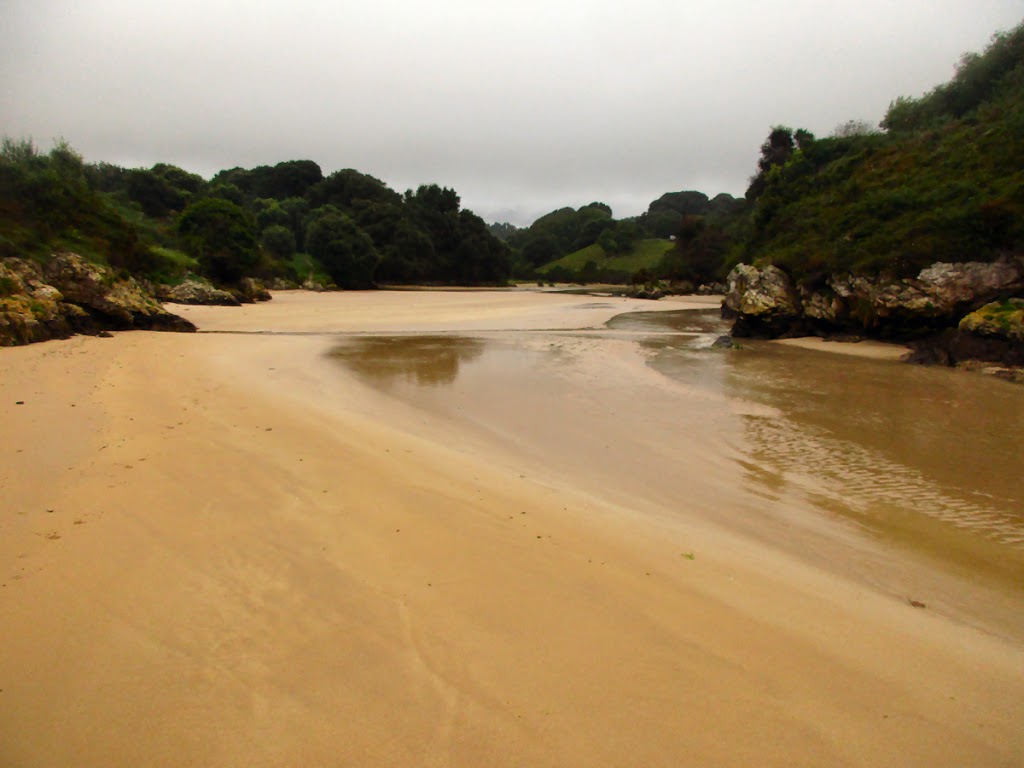 I walked a ways upstream and then back down to the ocean. A small tractor with a wagon, and then two much larger ones were grinding their way to the tide lines. The small tractor was accompanied by a man who manually forked red seaweed into the wagon bed. But the large ones backed right down into the waves and then seined seaweed dragging it up onto the beach in huge rolls. I assumed it was for fertilizer, but later learned that it is sold to companies who extract agar-agar from it. 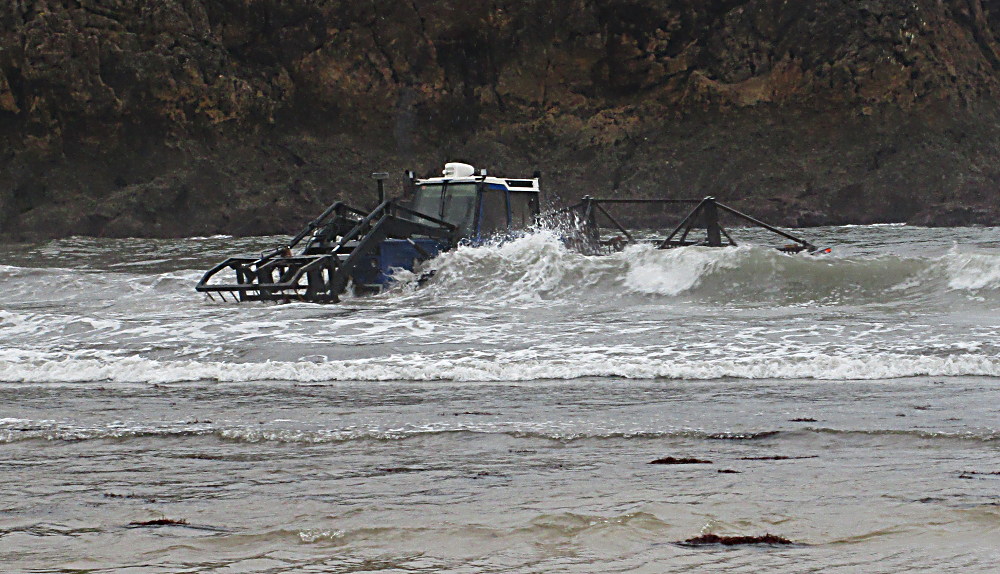 My topic of gratitude for the day was “for perseverance.” It was appropriate, because, for some reason, I felt tired most of the day. I just wanted to lie down and take nap. At one point finally gave myself a shot of sugar in my tea thermos. (I normally drink my tea black.) It either worked or was a great placebo—at least until I burned it off. For part of the day perseverance and/or sugar was all that kept me going.

I was well into Asturias now and would be for a couple weeks. One thing you find in Asturias is an architecture that is characterized by bright, yet somewhat rich earthy colors. Some of the homes are quite striking. In front of the homes you usually find a couple palm trees. 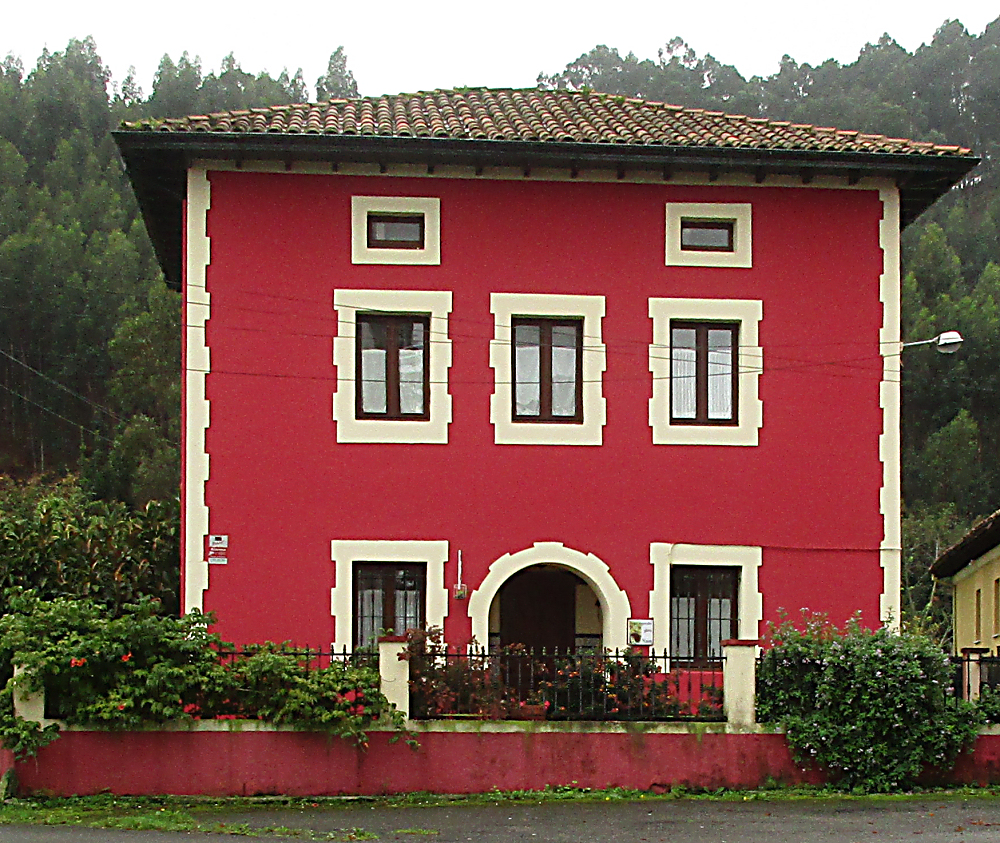 This style came from the many Asturian people who made their fortunes with plantations in the Caribbean in the 16thCentury. When they came home, they built large mansions similar to the ones they had left behind complete with two palm trees flanking the front, to remind them of their second homes. As time went by, even middle-class families copied the style. As I passed many of these homes—even the modest ones, I could not help but feel saddened by the fact that  these fortunes were made on the backs of slaves in the sugar fields. But, I reminded myself, this was no different from the many antebellum homes we have in the southeast US.