This would turn out to be mostly a long, uninspiring day. Except for the first few miles while I walked and visited with Caitlin, the way had little variety and the last half was on suburban and industrial pavement with little variety. The only upside was that there were few ups and downs.

There was a short stretch in a lovely wooded area where I captured these mushrooms. 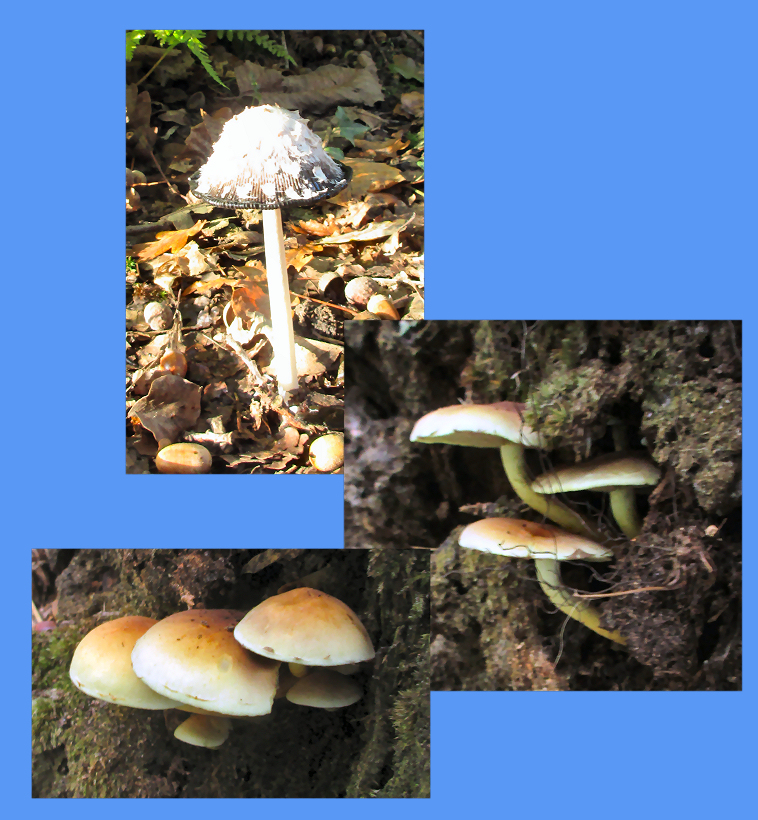 We started the day at about 3º C—pretty cold—but by the time I reached Cerdeño on the outskirts of Oviedo in the late afternoon, I was hot, sticky, and completely wilted. I stopped in a grocery and bought cold water and cold orange juice and downed them all at once in a nearby park before continuing on into Oviedo.

And then it happened…the hostel in Oviedo I had picked out to stay for a few days was CLOSED and it was almost 7:00 pm. Why do these things happen at the end of a LONG day? My guidebook indicated that the peregrino albergue would be closed by this time of year, but I decided to try it anyway. When I got there, the hospitera assured me that it is open year-round. I had a bed for one night at least and was grateful for that!

Oviedo is the official start of the Camino Primitivo and many people who are doing just this Camino fly here to begin. At the albergue, I visited with two Australians and one Danish woman who were just starting their Camino. It felt funny to be the Camino “expert” of the group.

The next morning, I had to leave the peregrino albergue and find another albergue privado where I could stay a couple more nights. I had quite a bit of work to catch up on for a client, so I needed good wi-fi. La Peregrina was recommended. It turned out to be pretty run down with no kitchen, but I had a room to myself and the wi-fi was good enough for me to upload files and use Skype. Also, it was very cheap: 7 €!

October 12 is Columbus Day in Portugal. It is not much celebrated in the US, but you can imagine how important it is to the Portuguese. Shops are closed and there are many festivities. I came across these bagpipers in a plaza. Did you know that bagpipes originated here in Asturias, Spain? Evidence of them has been found beginning in the 14th Century.

Even though I worked quite a bit, I had time to go out and explore (and eat!) in this compelling city. I visited the main park, Campo de San Francisco, and sat on a bench catching up on my journal for a couple hours. Then I walked around admiring the public art, especially these captivating statues. 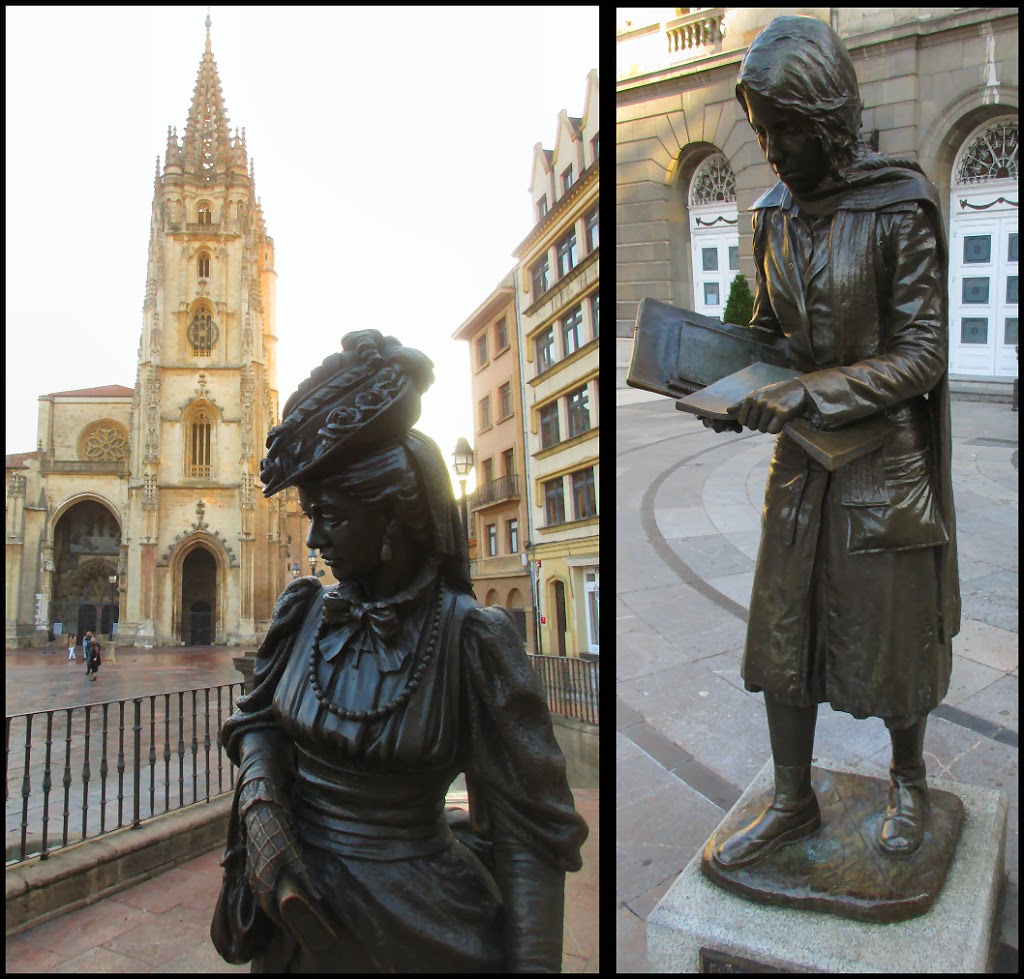 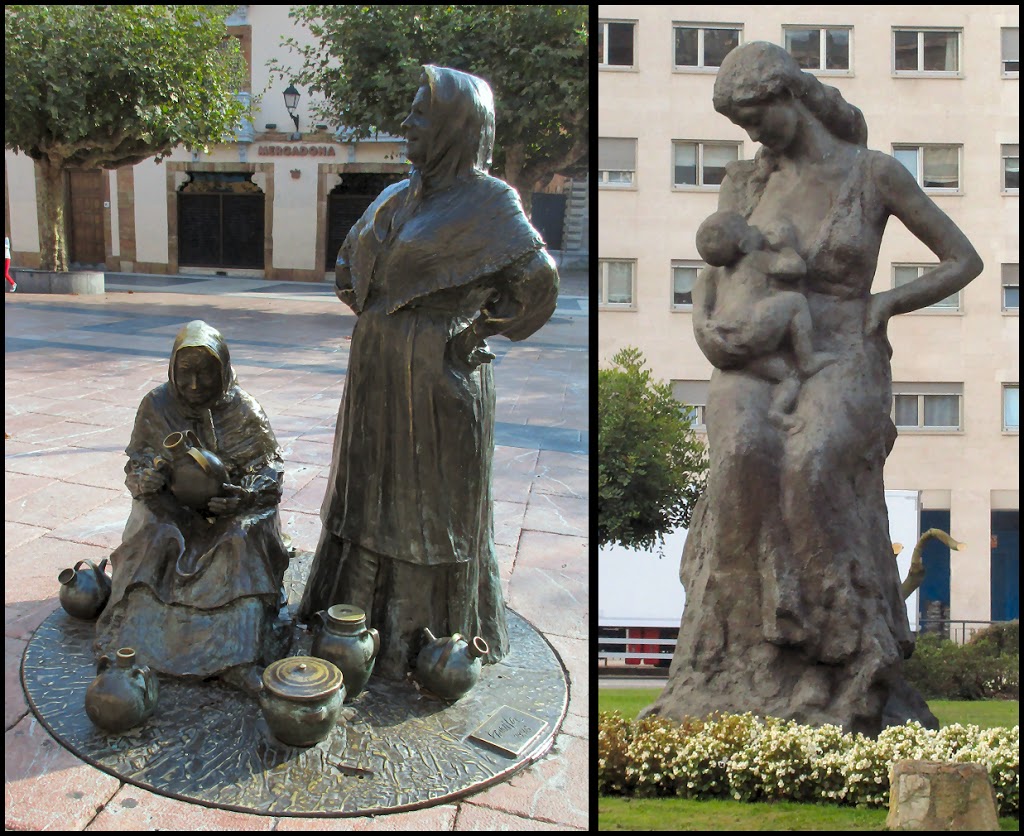 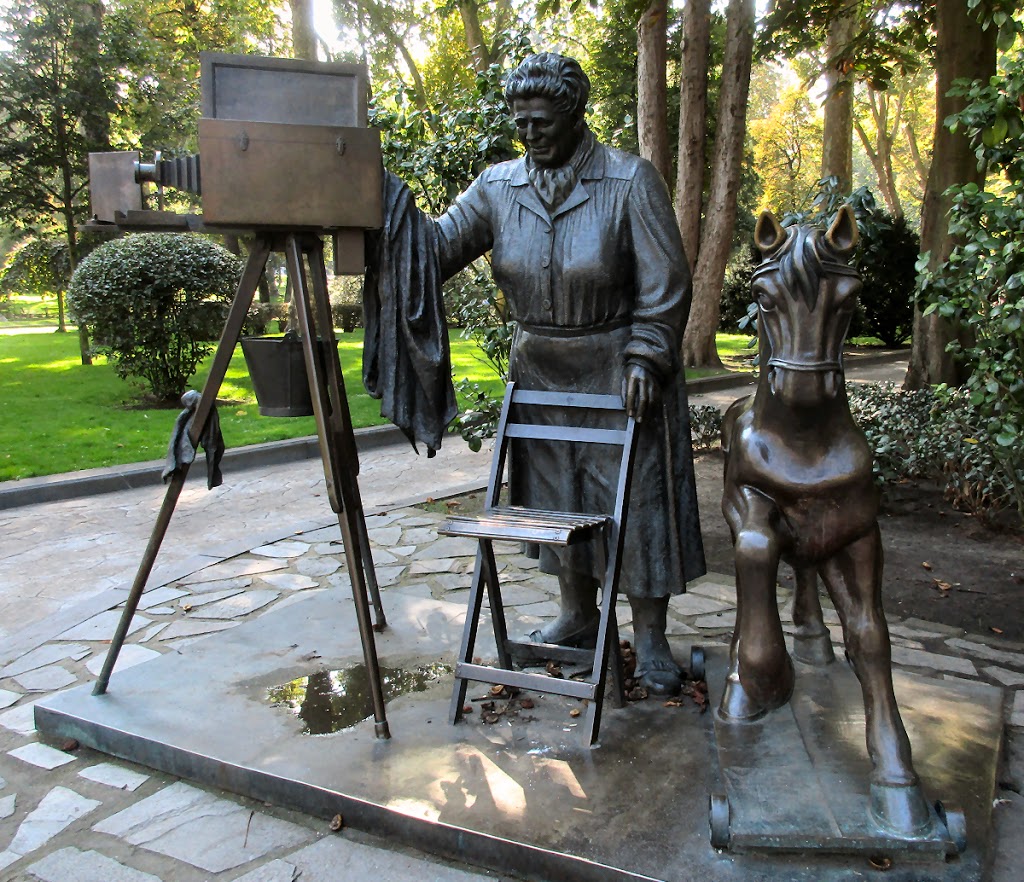 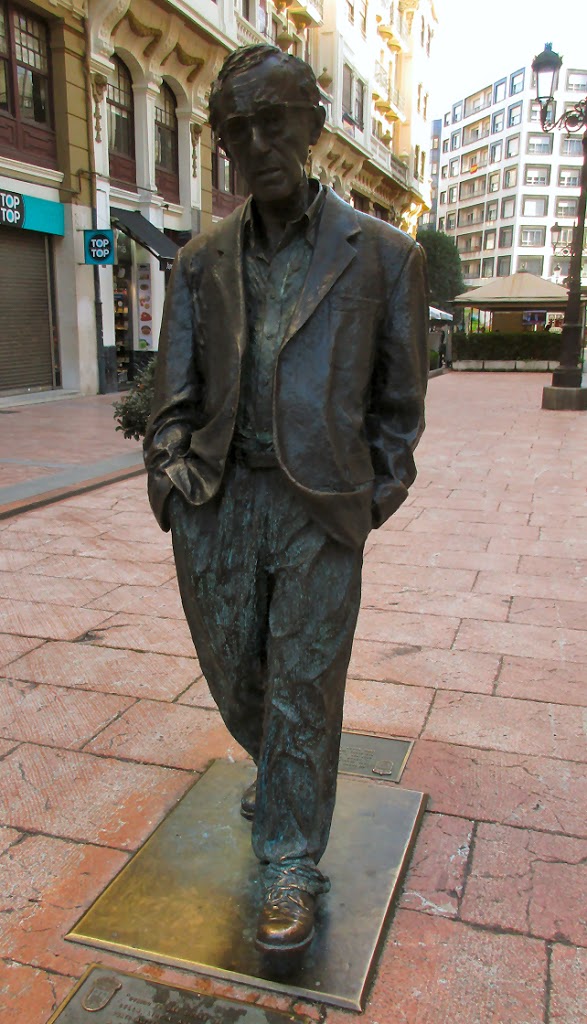 I was intrigued to find this famous sculpture of Woody Allen. He made a movie partially set in Oviedo, Vickie Christina Barcelona, and he fell in love with the city. The plaque nearby quotes him (and can’t you just hear the voiceover?), “A delicious, exotic, beautiful, clean, pleasant, tranquil and pedestrianised city….As if this world did not exist…Oviedo is like a fairy tale.”

Then I explored the neighborhood, and discovered a knitting shop (YAY!) that was closed for the holiday (BOO!). But it would be open the next day (YAY!). 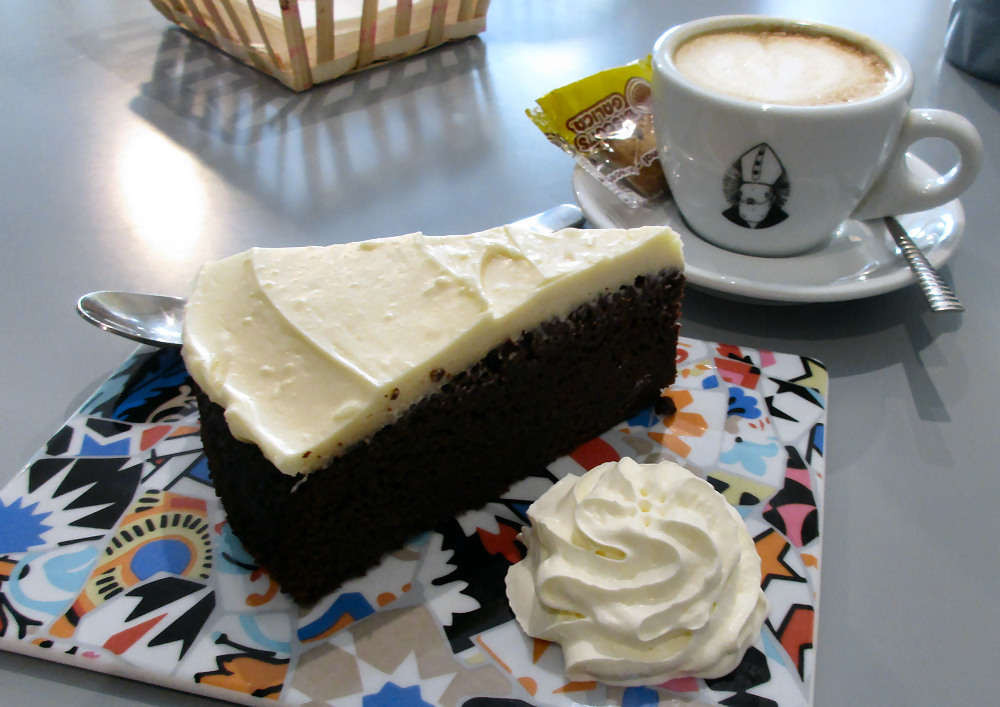 Then I came upon the Brótchen Café and enjoyed a huge piece of chocolate cake baked with dark beer and with a cream cheese frosting. I almost stopped the server from adding whipped cream on the side and then came to my senses, “OK!” I laughed. It was so rich, I only could eat half of it and packed the other half in my bag for later. All these extra calories don’t seem to matter…I am still losing weight!

More city exploring today. On the list was the large indoor food market. BUT FIRST: as I was walking there looking out for an ATM on the way, I heard, “Cathy!” At first. I ignored it—who could know me here? When I heard it again, I turned and who was walking toward me but Caitlin, who I met two days earlier!! I could not believe it—the likelihood was so remote that I would meet her and Gerry again, even though I was hoping we would. I had so enjoyed their company. It turned out that I was passing the hotel where she and Gerry were staying. They were sitting by the café window and just happened to look out as I passed. We enjoyed one last café together before they flew back to Ireland and I continued on to the market. I think I will see them yet again!

I don’t really believe in
coincidences much anymore.

I love markets and this one was so very colorful and lively. One woman only sold ingredients for fabada! 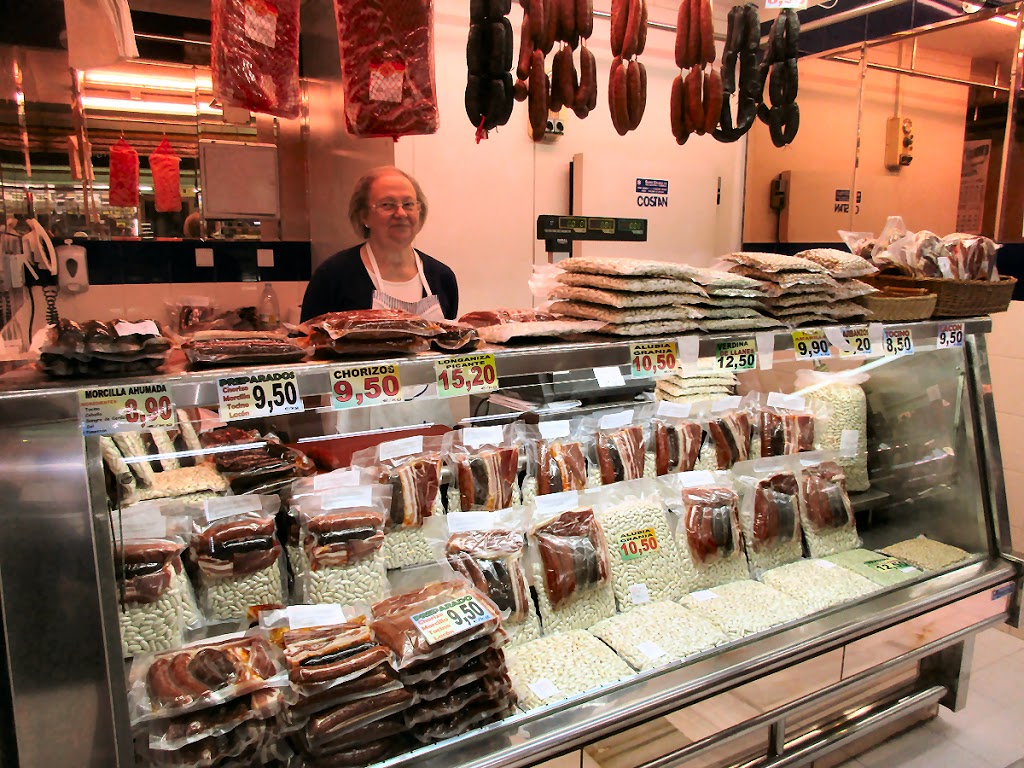 And the fish! Makes me wish I had a kitchen. 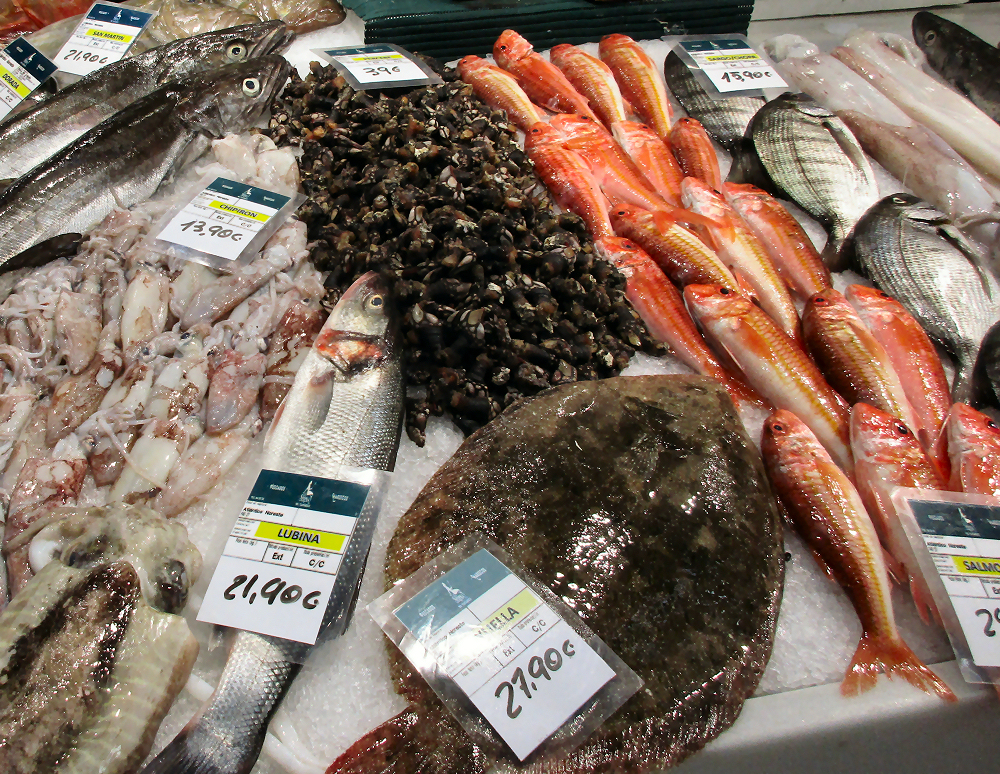 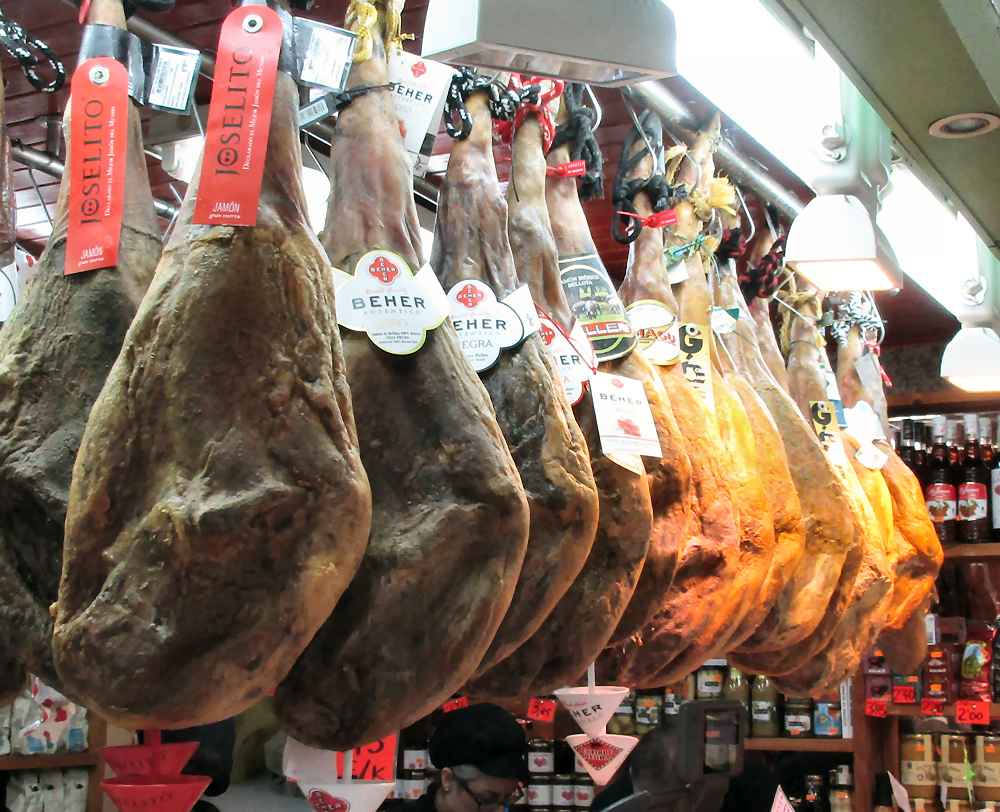 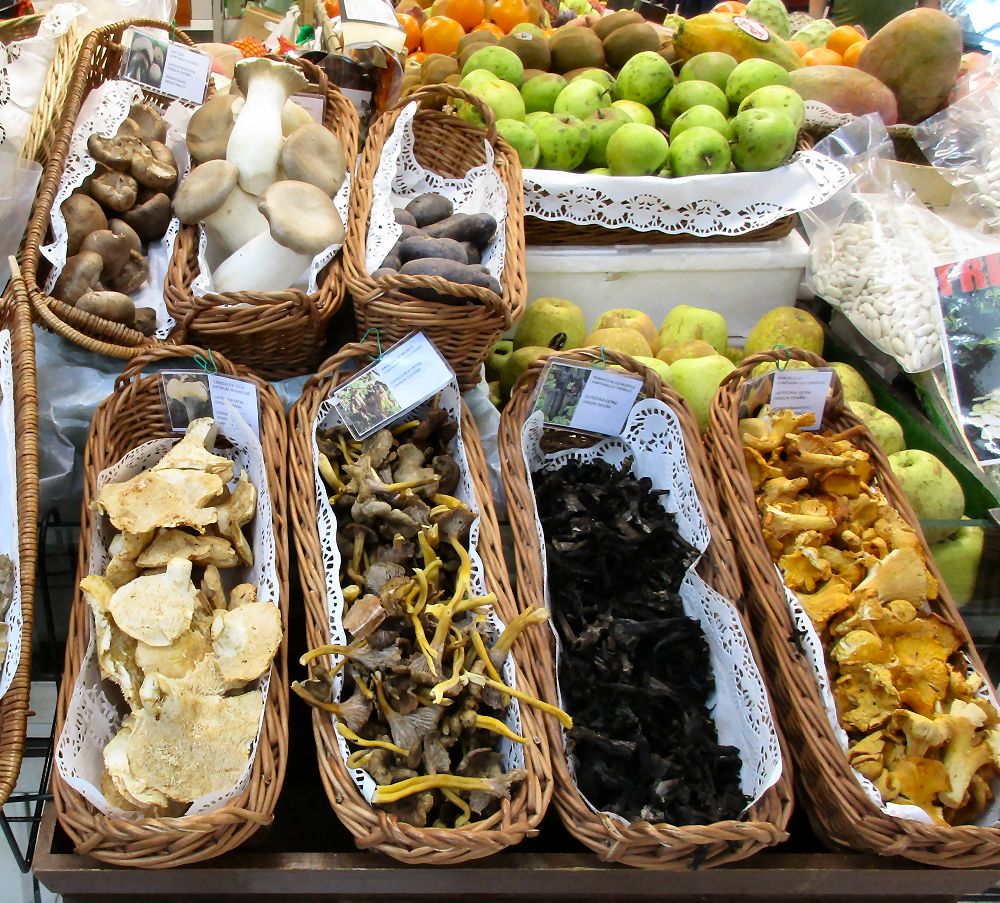 Next was an obligatory (!) return to the yarn shop, Lana Y Punto (“Yarn and Stitch”). The shop was not busy and I spent almost an hour visiting with Marisa.

I purchased a striking ball of multicolored merino/poly blend. Not sure what I am going to do with it, but is sure is pretty and does not take up much room in my pack, where I also have stashed a couple needles and small spindle in case of a fiber emergency. (There’s always room for fiber stuff!!)

For dinner, I entered a restaurant that advertised a menu of fabada and a bottle of cider with  arroz con leche for dessert. The fabadawas okay, but they obviously added the sausages right before serving because they were cold. I had to pour my own cider and could not even approximate the artistic pour I had witnessed in Vilaviciosa, but it was all good enough.

Tomorrow I would hit the Camino trail once again.