I’m taking a little segue from my series on the El Camino. Yesterday I experienced
one of those days that made me want to pinch myself and just had to share it right away!

I am lingering in the Douro River Valley here in Portugal. Sometimes, when I walk through the countryside, I feel like I am in a scene from Under the Tuscan Sun. Although it is November, the sun is shining brightly on most days and the mornings are clear and crisp. Great for an accidental tourist wanderer like me, but the farmers are quite worried. It is supposed to be raining—a LOT! 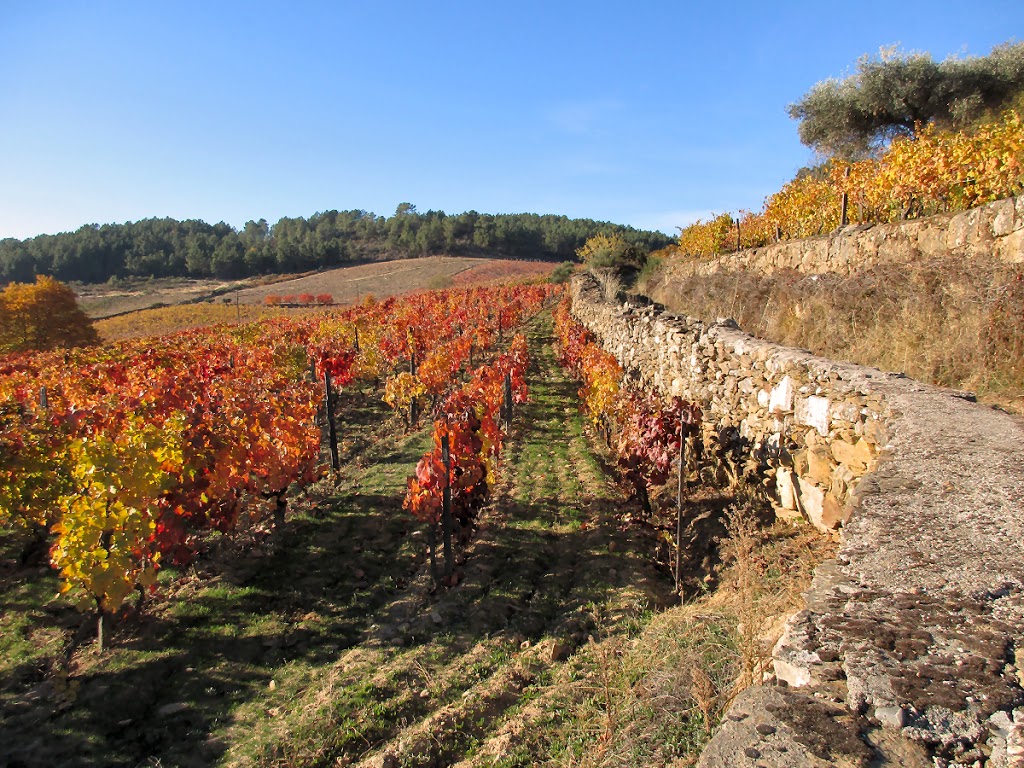 Yesterday, I took a break from my work to take a downhill walk from the nearby village of Castedo to Pinhão on the banks of the Douro—about 8 miles. It turned out to be one of the highlights of my traveling year.

I took a bus from Alijo to Castedo. This shortened the hike so that I did not have to rush down to Pinhão to be sure I made it in time to take the last bus back up to Alijo. The day was clear in Alijo, but as we descended into the valley, I noticed that the river was cloaked in fog. “Oh well,” I told myself, “it will burn off soon.” But by the time the bus dumped me in Castedo, I was surrounded by “pea soup.” 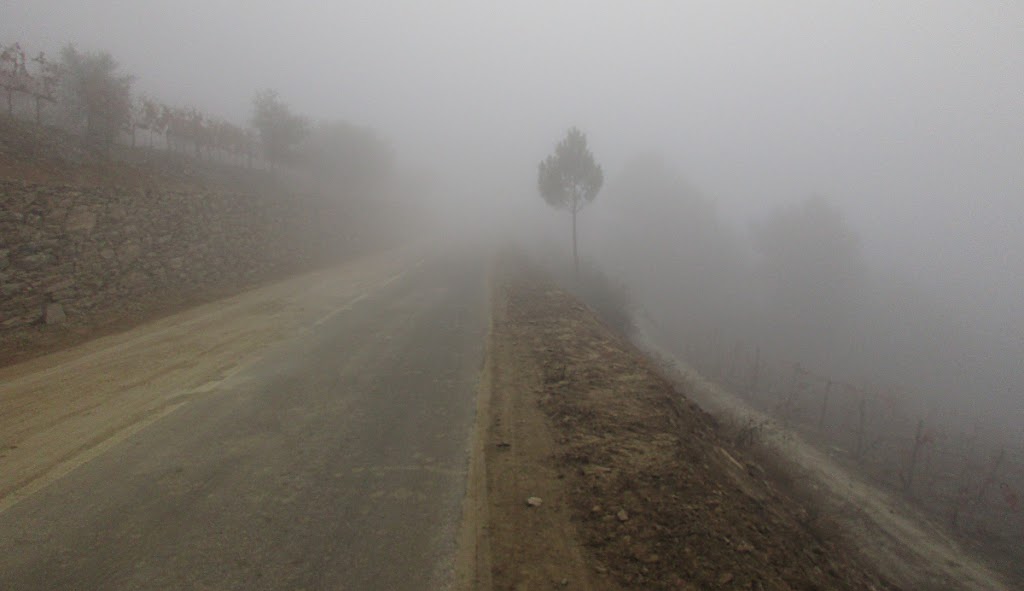 Oh great…this was not going to be the scenic hike I had planned. I was disappointed. But not for long. One thing I have learned on my travels so far, is that things always seem to turn out. It is important to embrace your surroundings.

So, I set off, looking around. And it was not long before I discovered that the world around me was enchanted. The church became mystical; rows of colorful grape leaves disappeared into the distance; the dew hung heavy on forgotten grapes; and like wizened ancient wizards, the pruned vines hobbled away into the mist.

Over the next couple hours, the sun won its battle with the clouds and slowly the distant terraces emerged.

It was still cold and the sweet tea in my thermos was calling me.  I found a bench in Vilanrinho do Cotas to eat a snack and enjoy the hot tea in the sunshine. The village straddles a saddle between valleys and to my right I noticed the fog trying its best to creep over the ridge to make an assault on the clear side. But it dissipated weakly under this Douro sun.

Two more kilometers brought me to Casal de Loivos, where I had been told there was a stunning miradouro (an overlook) that I should not miss. 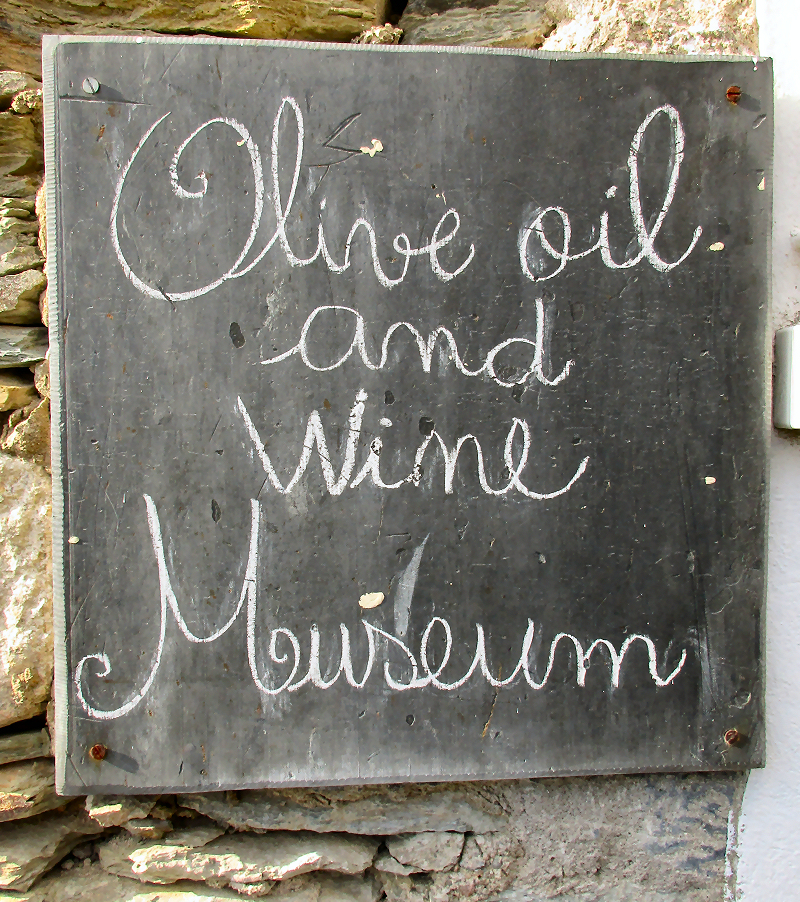 BUT, before that, I came across what would be the unexpected highlight of my day: The Olive Oil Press Museum! Surprised it was open, I walked in to see a small tour group immersed in a tasting. I walked through to a terrace overlooking the Douro river and Pinhao far below. Susanna, the museum host, walked out and offered me a tasting, “Outside or inside?” she asked. I chose the terrace and she proceeded to treat me to the local offering. 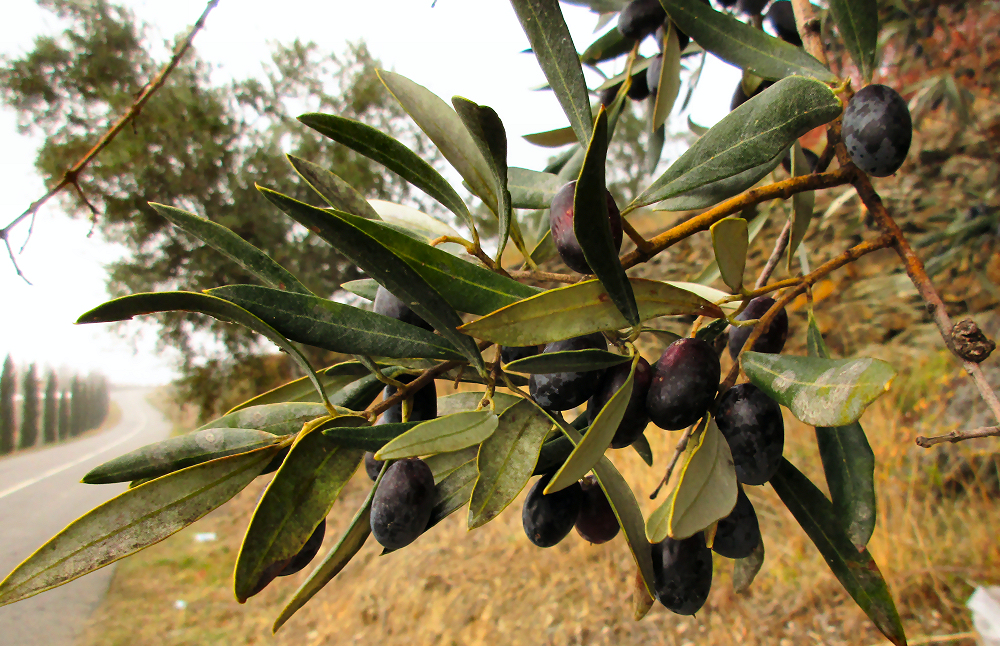 This museum is run by the D’Origem estate, where they grow grapes, olives, and almonds. They also have honey from bees who feast on the local nectar of rosemary, rockrose, and lime!

Before long, I was sitting before a tapestry of local foods: three table wines (white, a rose, and red), olive oil, almonds, honey, and grape juice! 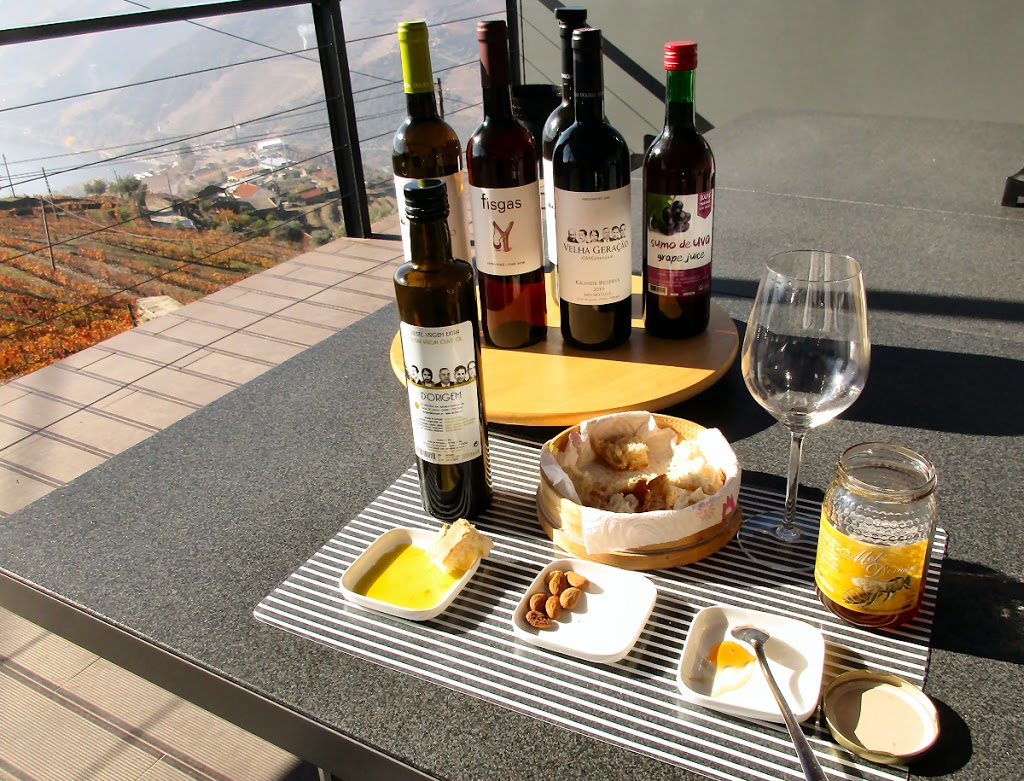 The estate bottles some of their grapes into juice so visitors who do not drink alcohol or do not wish to will  have an opportunity to appreciate the fresh-squeezed fruit of the vine.

Once the tour group left, Susanna joined me and enlightened me about the origins of this fare. The extra virgin olive oil was smooth and flavorful—I think the best I have ever had! Susanna explained that it is because it only has 0.3% acidity, which is very low for olive oil. My favorite wine was the white, which I later could not resist purchasing (for the amazingly affordable 8 €). The rosé was unexpectedly sweet even though most rosés are dry. Susanna said that while most rosés are a blend of grape varieties, the D’Origem family produces a single-variety rosé, resulting in a sweet wine.

When another small tour arrived, Susanna excused herself and invited me to join the group while she explained the museum’s equipment and how olive oil is produced. I also purchased some olive oil. I eat salads almost daily and I have decided to donate my current bottle of oil from the store to the hostel’s kitchen. I now have a special stash! 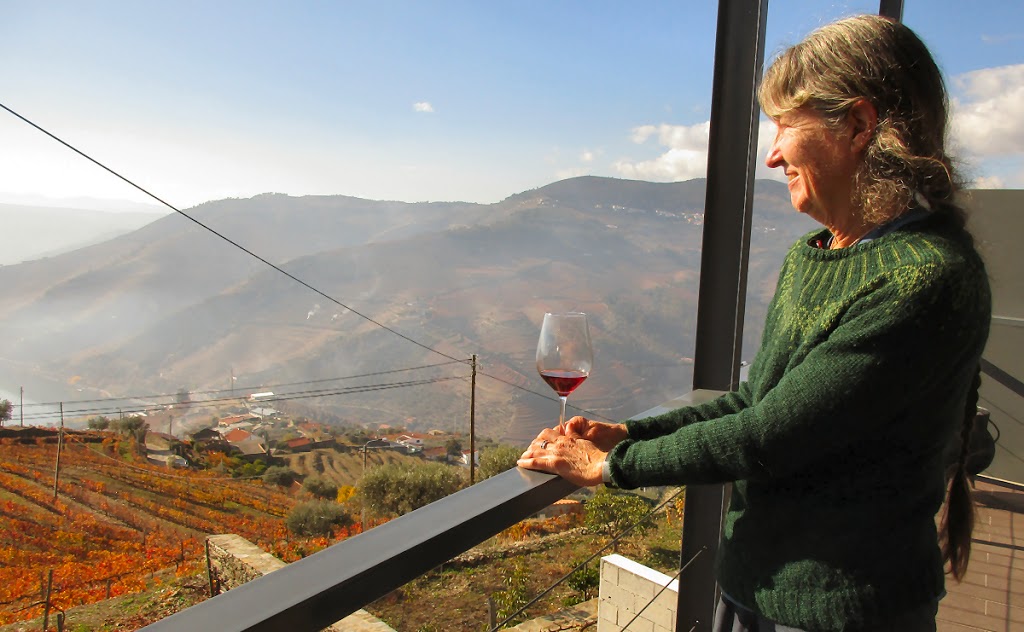 Downhill a few more kilometers brought me to Pinhao, my destination. I explored the town a bit and crossed the Douro River for some photos. 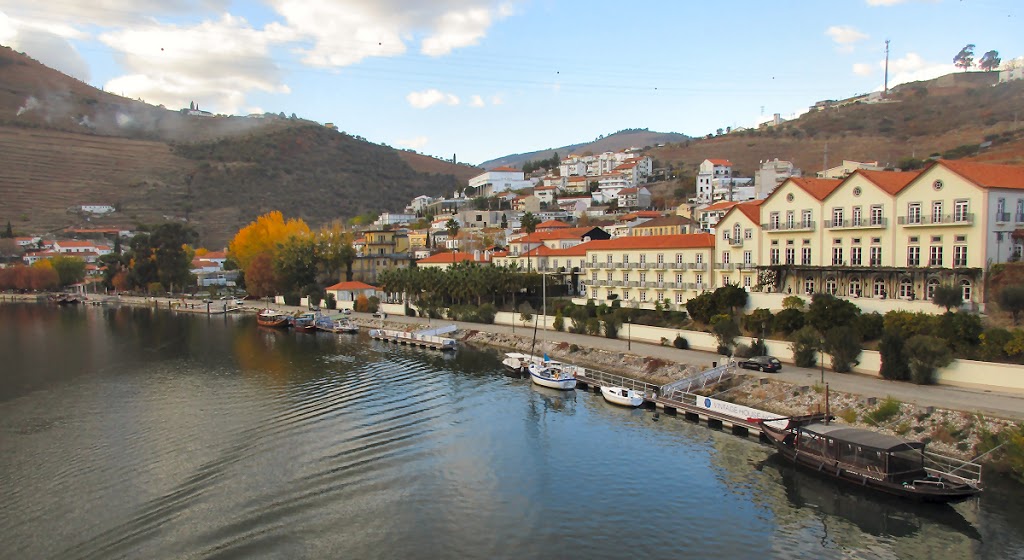 I enjoyed a nice sampler of local ham and cheese with salad and wine before boarding the bus back to Alijo. It was dark now and on the return I savored a different view of the valley—twinkling lights from the passing villages and hillside estates.

Sometimes at the end of such a day, I get this overwhelming sense
of “This cannot be my life,” and all the gratitude of which my
heart is capable is not enough.