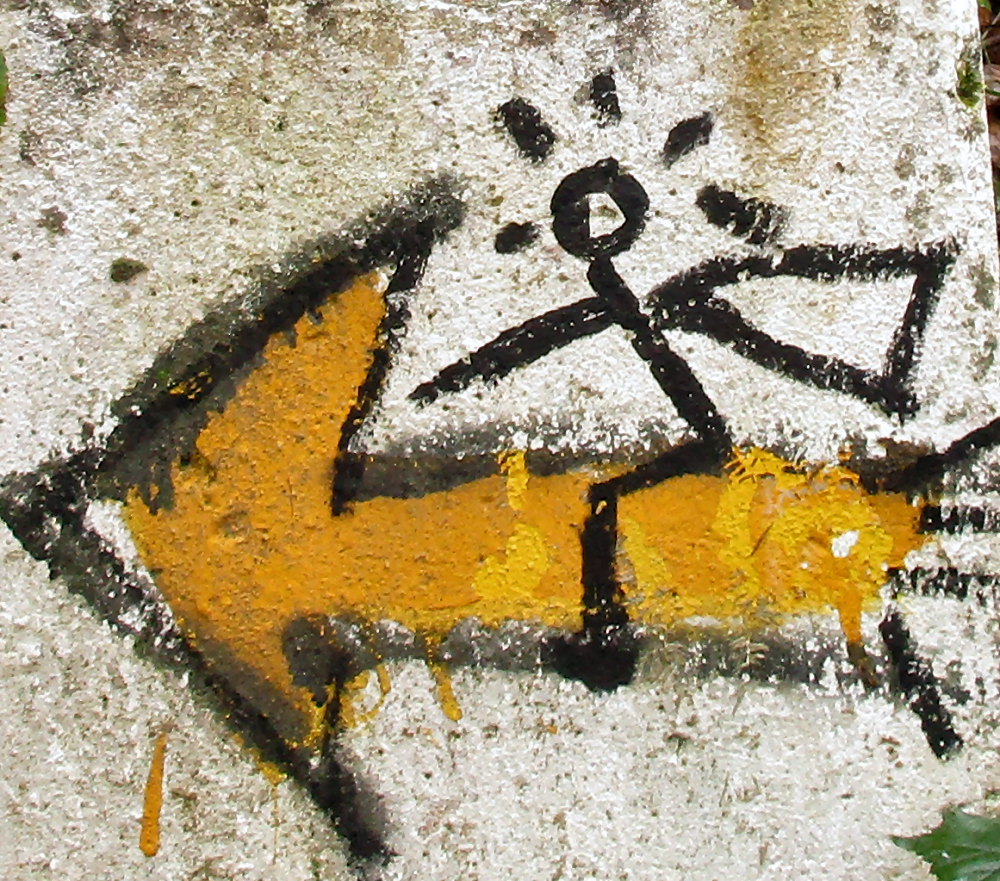 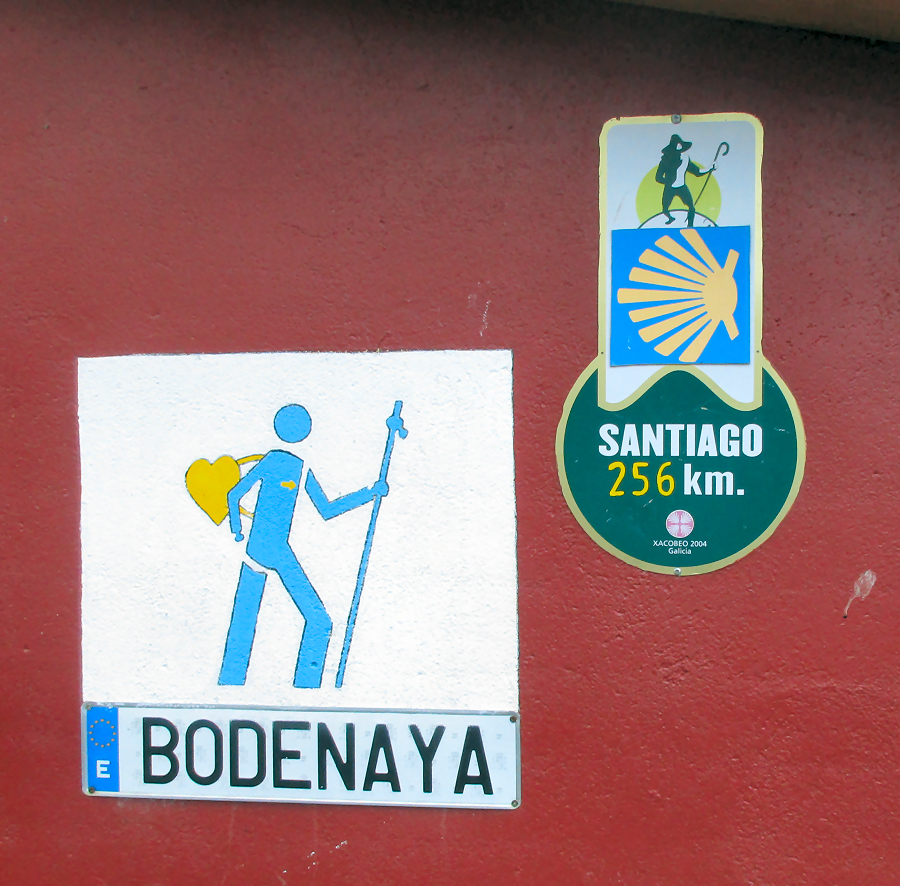 After breakfast, but before some of us left, David told us more about Bondenaya. He lives in the hórreo next door to the farmhouse-turned-albergue and it serves as his bedroom and office. He gave us a peek inside and they are much taller on the inside than they appear from the outside. 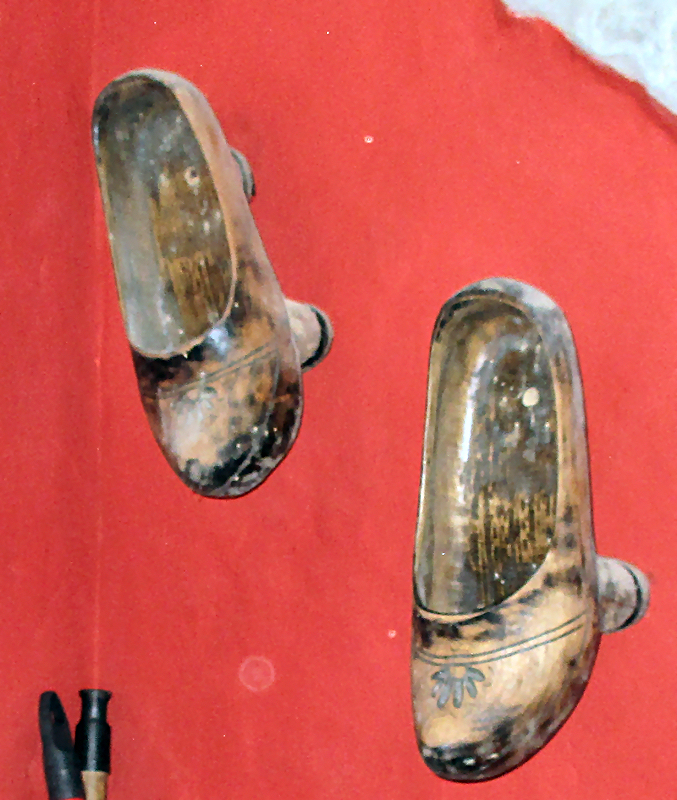 He showed us some of the artifacts on the walls of the albergue. The most interesting to me were the wooden shoes, called madreñas in Spanish. Similar to Dutch clogs, they are carved of chestnut wood and each shoe has three little pedestals. They were traditionally worn in the muddy fields to keep feet dry. 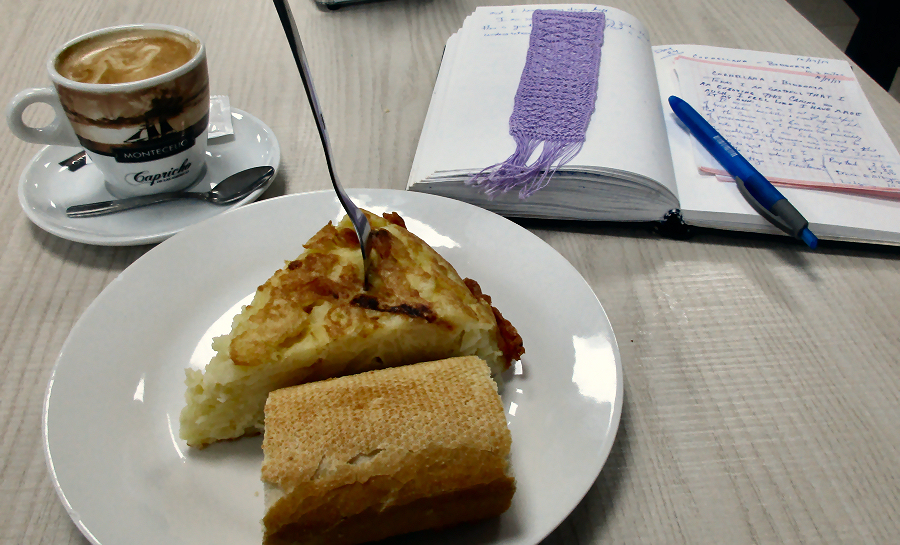 Because David was so interesting to listen to, I delayed leaving such that in only a kilometer, I was ready to eat again. In a little bar, I got a tortilla (like our omlettes), bread, and café con leche for €2.30. How do they sell food so cheaply?

The day started out with no rain, but the sky was gray and it was not long before a light rain commenced. I was resting by a fountain and an old man shuffled up to me with the help of a cane and umbrella. He was wearing a pair of madreñas! He rested for a bit on the bench next to me and then started back the way he had come.

You know—life is full of ironies…About 3-4 times a day, I need to find a good place to pee. Sometimes it is not easy if you are in wide open spaces, or in a heavily populated area. And public toilets are non-existent in rural areas. I heard rumors about a Camino guidebook in German that is called the “magic guide” because it points out all kinds of interesting and special places, including the best hiding places to “do your business.” 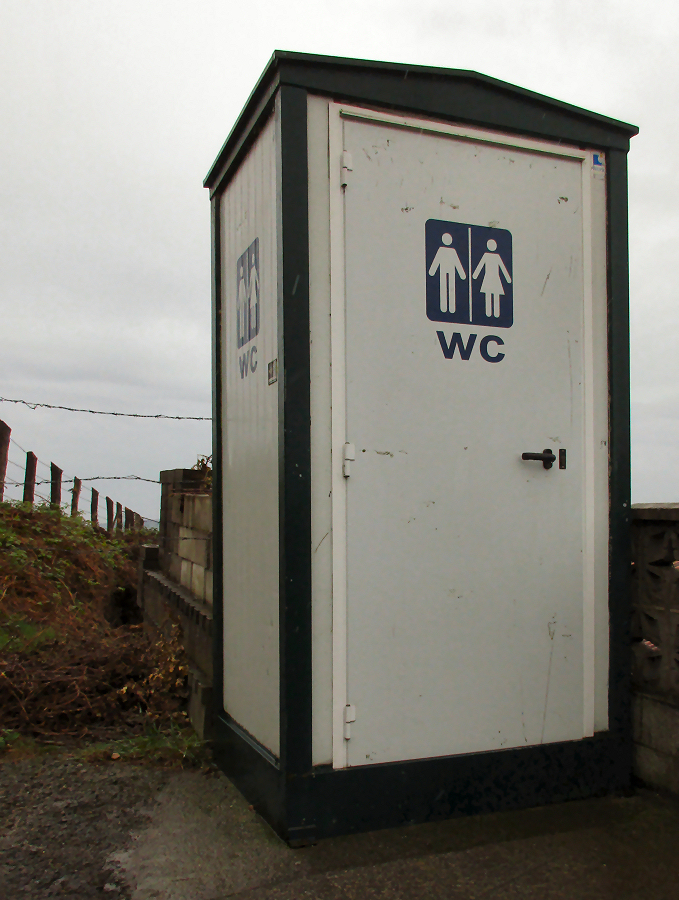 It was not unusual for me to walk 2-3 kilometers before a place presented itself. Okay, call me a little over concerned with shyness. One day, I got so desperate that I just decided it did not matter if anyone saw me and squatted down to pee within view of about 6 farmhouses. But today, between two villages, I came upon this “porta-potty” in the middle nowhere. And guess what? I did not need to use it!!!

Reaching Tineo, I had the choice between the run-down pilgrim’s albergue for €5, or the fancy albergue attached to the fancy hotel in the town center for €12. After one look at the pilgrim’s albergue, I decided to check out the hotel. But first, I had to carefully descend quite a few steps to the street below. When I got to (what I thought was) the sidewalk, I stopped to get my bearings. Then, not realizing there was one more step, I walked forward and fell flat on my chest. Life seemed to swing into slow motion as I hit the pavement and then my pack crashed against me, crushing me harder to the pavement. My first fear was that my Camino was over. In pain, and cursing, I rolled over and unharnessed myself from my pack. The funny thing was, I had my trekking poles in my hands, but had not been using them for support once I got down the stairs.

I was lucky this time. I did not hit my head. Two men were walking up the street and they came toward me, so I thought they were going to offer help, but one got into a car and the other walked off. I was already mad and now my feelings were hurt. Tears welled up. I sat down on a bench and took a breath. Better…

Then a woman stopped her car, spoke to the man walking off, and got out of her car and came over to see if I was okay. By then I knew my injuries were superficial and the only harm was some embarrassment, so I thanked her and told her I was fine. I had a scraped up knee—a Camino battle scar. The worst thing was that my new hiking pants (that I had just bought in Bristol before I started the Camino!) were torn across the knee. I got mad all over again! 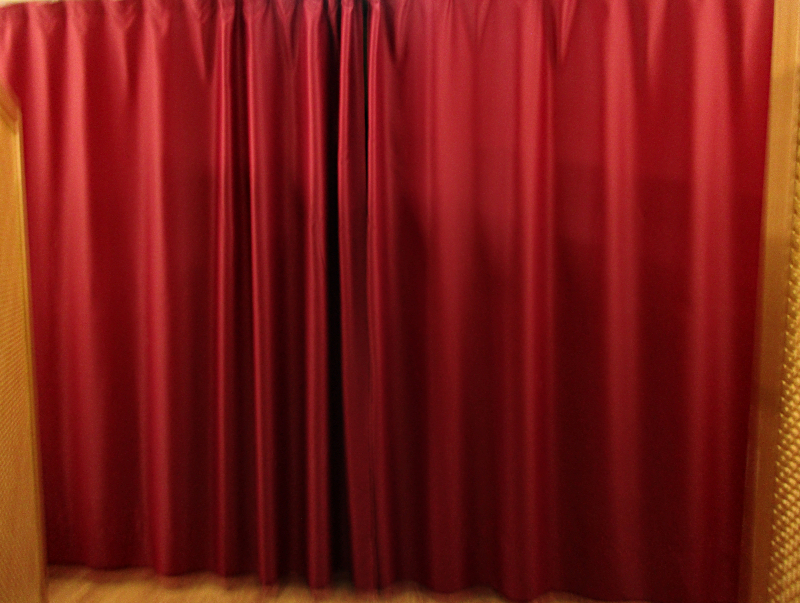 Recuperated, I found the hotel. It was a bit weird. Everything was antiseptically clean and very quiet. Red drapes hung from floor to ceiling everywhere, creating the feeling that I was living in Cooper’s “Red Room” dream from Twin Peaks. The place was comfortable enough and pilgrims were given free use of the sauna between 5 and 7 pm. Sounded wonderful, but there were only mostly-naked Frenchmen in there and I just did not feel like I would fit in. Also, there was no kitchen, so most of us bought ready-made meals at the nearby market for dinner and breakfast.

I was glad to move on from Tineo the next day. 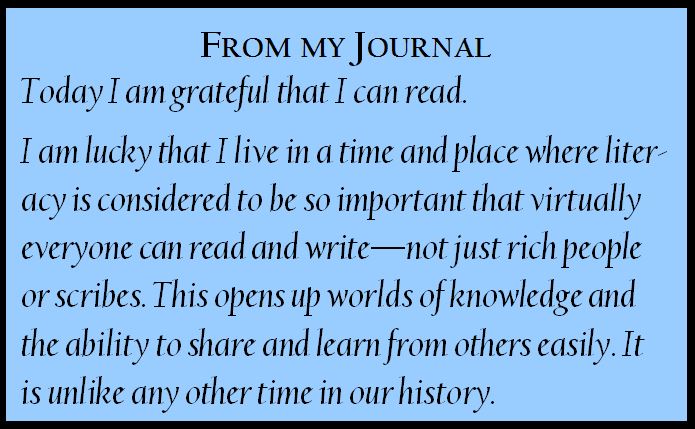 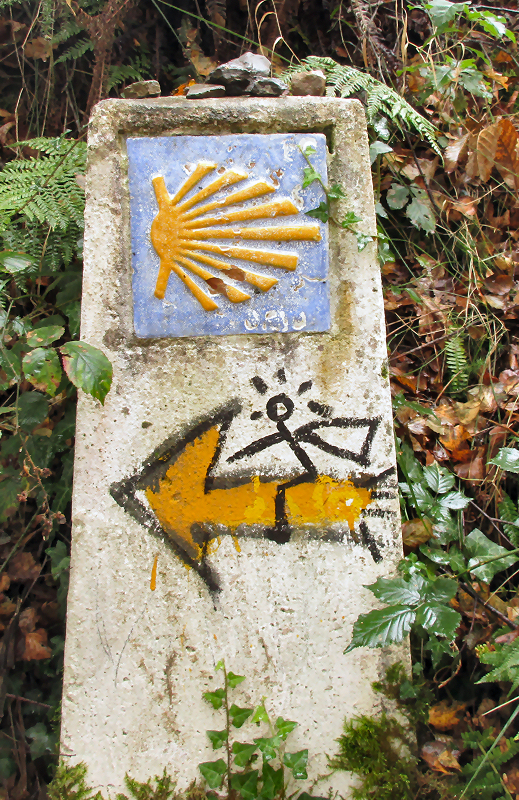