Or, how to travel ON the “beaten track”
and not encounter anyone!

I’m taking another segue from my series on the El Camino
to share a recent winter hike in the Scottish Highlands. 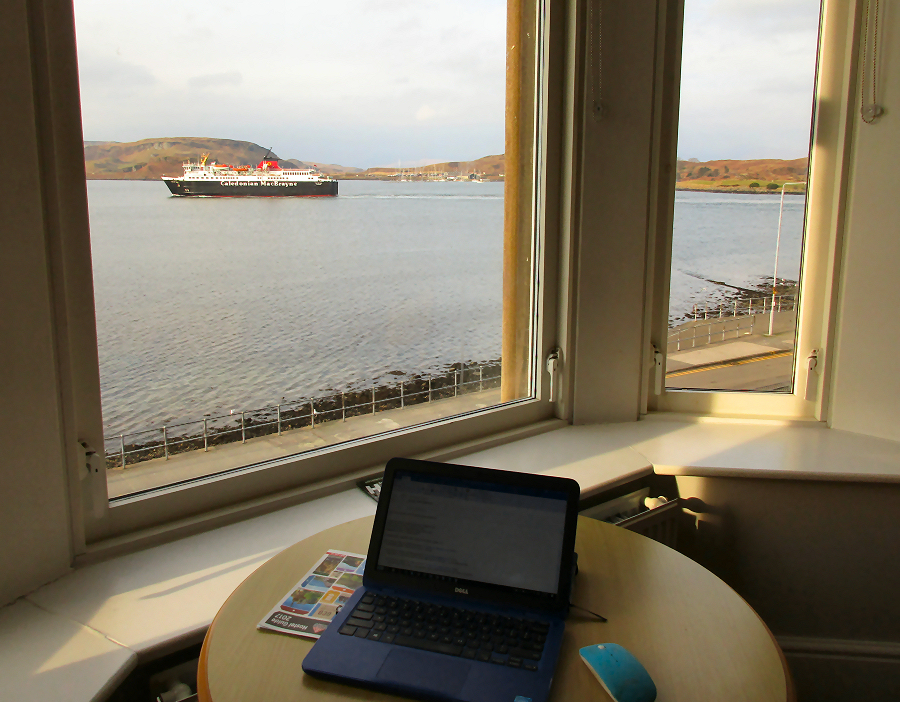 I am now in western Scotland, hanging out in the bayside town of Oban, which is the “jumping-off-place” for ferries going to the Isle of Mull and the Outer Hebrides. I feel so blessed to be lodging in the local Scottish Youth Hostel. My room has a bay window that overlooks the harbor and I can sit here and watch the ferries come and go while I work. I have a lovely communal kitchen downstairs where I prepare most of my meals, and if I get a hankerin’ for a pint, the nearest pub is a short walk away.

Although traveling during low season has its pitfalls (it can be “bloody” cold and windy), the peace and quiet you encounter more than makes up for them. Also, the people in these towns and small villages have more time to talk and get to know you.

As my regular readers have figured out, when visiting any country, I tend to find a small town and settle there for a week or more. Since being a nomad has apparently become a way of life, I have found that it is not a good idea to treat this form of traveling like a two-week holiday. If I flitted from one location to another every couple of days, I would quickly burn out. This “slow travel” allows me opportunites to meet a few locals and absorb the flavors of the place. It also gives me extra time to research next destinations as well as work on my knitting projects.

The day after arriving in Scotland last Wednesday, I took the West Highland rail line from Glasgow to Oban. This is a stunning route, especially in winter. I kept wanting to get off the train and start walking up one of those enticing valleys or along the loch shore. And that gave me an idea. I jotted down the stations we passed that were in the heart of these Highlands. When I settled in my lodgings, it took little research to find some trails that were accessible from train stations. (Walkhighlands.co.uk is a treasure trove of ideas.) Utilizing WalkHighlands and Google Maps, I was able to put together a day hike of about eight miles that took me from Tyndrum to Crainlarich stations. That made it easy to travel from and return to Oban in one day. 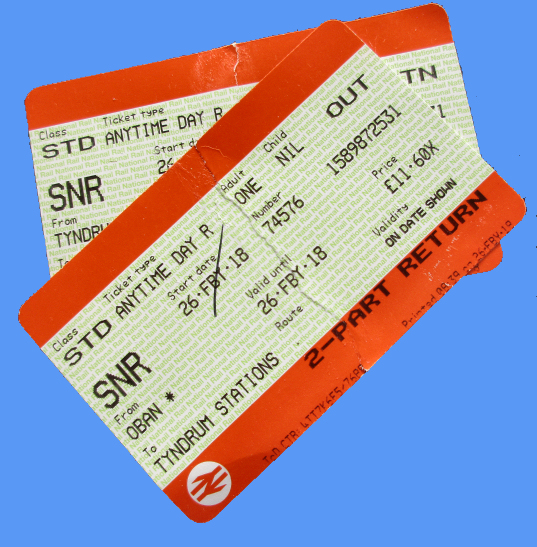 I LOVE trains. We don’t have trains in the United States like they do here. They are so comfortable and easy to use. Given the chance, I always choose trains over buses. In the UK, Senior Rail cards are available to anyone over 60. You don’t have to be a citizen. They cost £30 (about $42 USD) per year and you save one-third on all your rail tickets.

So yesterday, I packed up some sandwiches and other snacks, including dark chocolate and raisins—you burn a lot of calories walking in winter! I grabbed trekking poles, camera, and a few other odds and ends and took off. I had an hour to knit on the train—a great bonus for me!

Arriving in Tyndrum, it took me a bit to find the West Highland Way and start off. My plan was to walk on this very popular trail a couple kilometers and then take off up a valley along a loop trail called the Sheep’s Walk; return to the West Highland Way and back to Tyndrum. As you will see, I changed plans partway through, which turned out okay. But, I realized later that it was a foolhardy move and could have cost my life.

In the summer, the West Highland Way is a virtual highway of trekkers. I might encounter as many as 100 people on a nice summer day. Today I would meet five other walkers. Of course, I had to be prepared for the cold, but dressing in several layers was the remedy.

Soon after leaving the train I came upon the Lochan of the Lost Sword. It is said that after a defeat at the nearby battle of Dalrigh, Robert the Bruce’s army threw their weapons, including his legendary claymore (long-sword), in this tiny lake.  Today the icy little pond was peaceful and a nice place to eat my lunch. 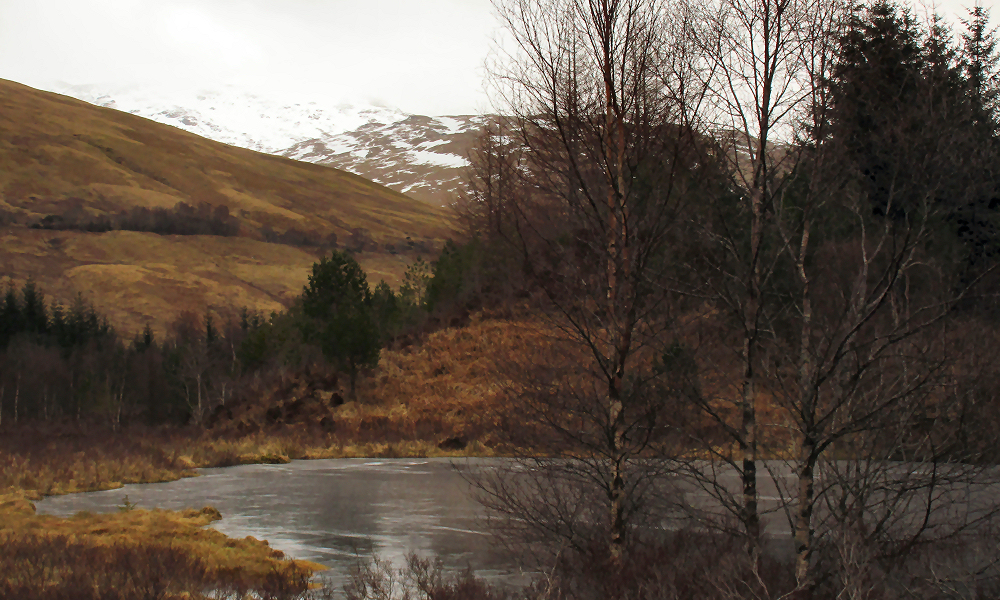 Soon I came to Auchtertyre Farm, where the Scottish Rural College does research on sustainable livestock farming. This is there where I turned off the West Highland Way to follow a (sometimes non-existent) loop up into the Chlachain Glen and back. 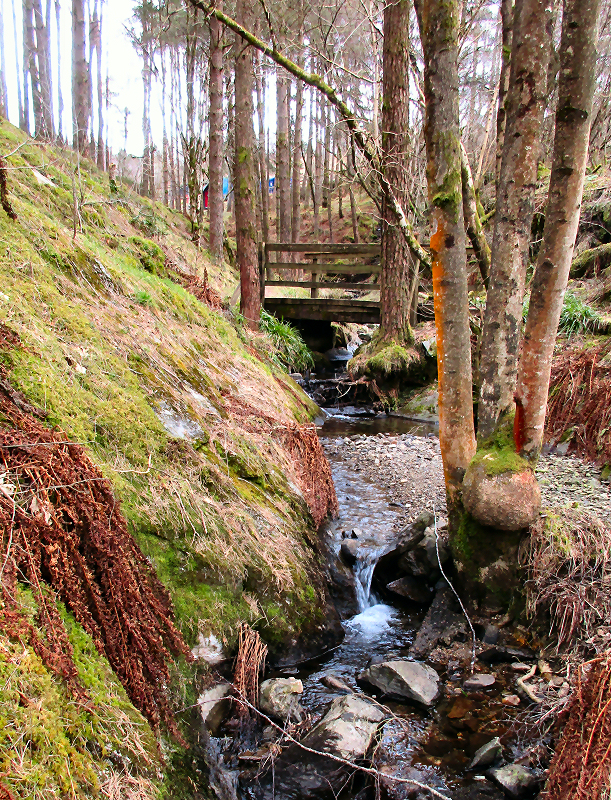 The first part of the trail took me right along a racing burn (stream) in pine forest with several waterfalls and green pools. Probably enticing on a hot summer day, but not now! I frequently saw ice in the water.

Leaving the forest, I came out on an open moor. It soon became difficult to find the trail. It was impossible to get lost with the burn always to my left, but I did misplace the trail quite frequently. Every time I found it again and would be comfortably walking along, it would suddenly and magically disappear and I was in a bog. Luckily, the ground was mostly frozen so walking in a bog was not so bad. In the summer, I would have sunk up to my ankles. (And yet another advantage of winter walking in the Highlands!)

Almost at the top of the trail, I came to a fork: I could go down to a bridge across the burn, short-cutting the loop, and return from here,  or I could continue on to the next crossing up the hill. There was a picnic table and I stopped for a snack and an opportunity to soak up the view. Then I opted to continue on this side of the burn.

Once I crossed the upper bridge, I was on a dirt road all the way back down the other side of the burn. The views were tremendous. It would not look like this in the summer!

And now is when I made my foolhardy decision. Of course, I did not think about it being foolhardy at the time. I said to myself, “If I hike back to Tyndrum station, I will have to wait about three hours for the train. I will have more walking time if, when I rejoin the West Highland Way, I continue on that trail south to the Crainlarich station and catch the train there.” So that is what I did. Looking back, I am glad that is the route I went because it was a rewarding end to my day.

But, here is what was foolhardy about my decision: I had left a note at my hostel about where I would be hiking and when to expect me back. But now I was deviating from that plan. If I did not return, they would be looking for me in the wrong place. As I mentioned, the West Highland Way is a highway of trekkers in the summer, but now, in winter, I would encounter no one the rest of the way to Crainlarich. It was plenty cold in the afternoon; I cannot imagine what it was like once darkness fell. And those icy patches could easily have meant a broken limb. In the middle of one particularly slippery slope, I realized my folly and started walking very carefully over snow rather than ice when I could. As usual, I was fortunate. But I cannot always depend on my good fortune.

I arrived in Crainlarich with an hour and a half to spare before meeting the train. The local pub was closed. (Many are at this time of year.) But, there was a Best Western Hotel (!!) here with a warm bar. I settled in with a pint of bitter beer by the fireplace and pulled out my knitting.

Map of the Sheep Walk portion of the hike. Details can be found at WalkHighlands.co.uk. 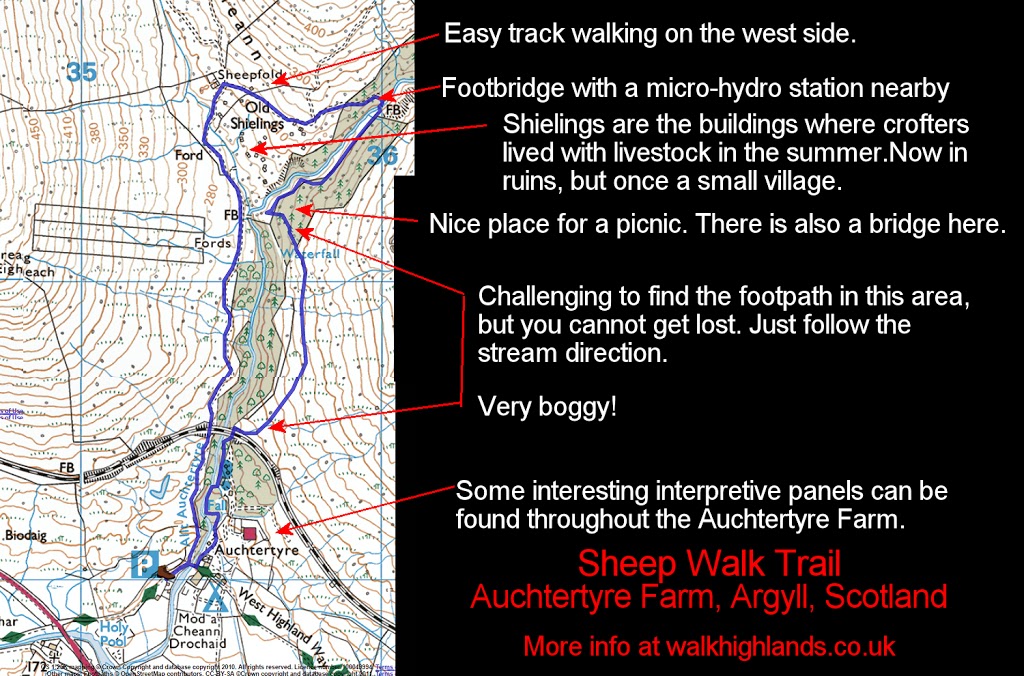 If I had the trail to do over, I would have omitted most of the right (east) side of the loop. I would have followed the Sheep Walk trail clockwise starting at Archtertyre Farm, crossed the first (lower) bridge over the water, continued north along the east side of the river, crossed the upper bridge, and returned all the way back to Archtertyer Farm on the dirt track (road). This way, I would have avoided the impossible-to-find trail and most of the boggy parts, but I still would have seen the stunning views.

1 thought on “A Winter Walk in the West Highlands”