I was glad to put Tineo behind me and be on my way. For the first part of the day, I felt very fatigued, which may have been my body punishing me for falling on my face the day before. Also, it was all uphill to start which was just not fair while my muscles were still cool. Early on, I had an excuse to stop when I saw this pilgrim effigy next to the trail. 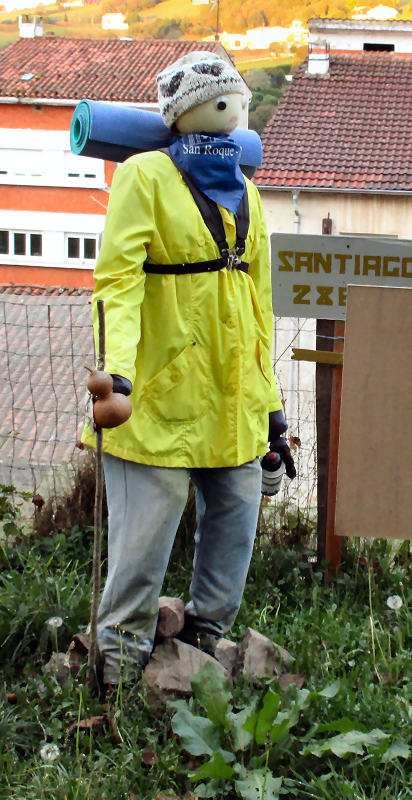 Some days, I fantasize about flying back to Vashon Island to see my long-time chiropractor, Elmer Carlson, so he can get my body lined back up again. And then I would fly back to Spain in order to continue beating my body up on the Camino. 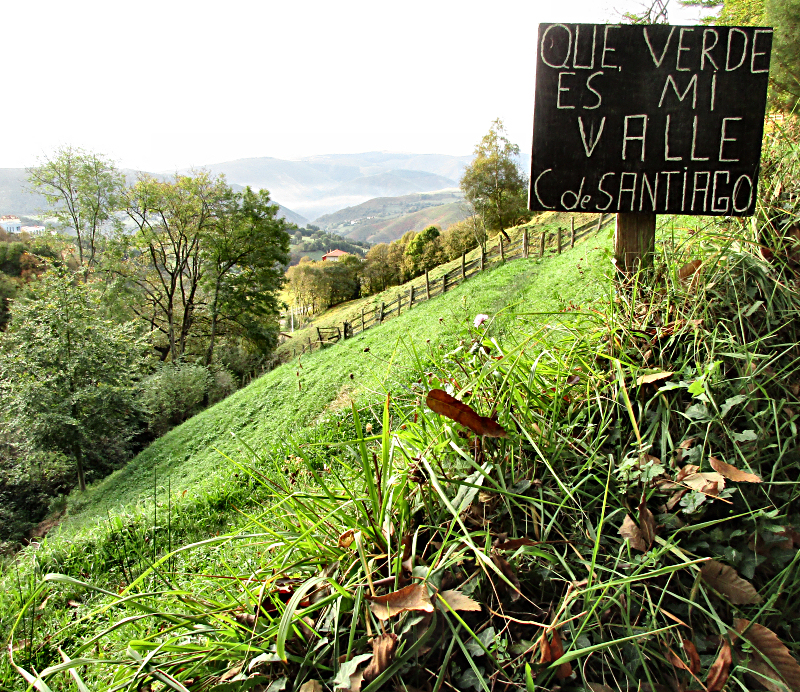 The trail was a long-not-too-steep uphill and a long-not-too-steep downhill through a nice forest—a fairly easy day’s walk. But the fatigue continued to dog me. I  planned to stay in Campiello an extra night to get a bit of work done and to give my body a little rest before tackling the next stage.

I arrived in Campiello by about 1:30—a very early day even for me. The town is basically made up of two albergues that cater to pilgrims. One was closed, so I stayed at Hostal Casa Ricardo, which consisted of an albergue, cafe-bar, and a food store with all kinds of items of interest to pilgrims, including boots! There were plenty of blankets on the beds, which was very welcome because the weather has turned pretty cold for October.

Also found here was great hospitality. The cafe offered a two-course meal with wine and dessert for only 9 Euros (about $11.00). Later, I was glad that I took advantage of the menu both nights I was here because on the day I left, the fatigue had abandoned me. Maybe I just needed some good food in my belly.

The long awaited Ruta Hospitales. It has a reputation of being difficult and long. Reading the trail descriptions, I became quite intimidated. I was worried that I would not be able to do it and there was not going to be another albergue for 16 miles. Sleeping out was not an option because the wind and rain up there can quickly lead to hypothermia. I had to make it across those mountains.

I got smart and decided to have my pack transported to Berducedo, the next stop. Some pilgrims have their packs transported every day, so there are several businesses that provide this service all along all the route. All I carried was a small lunch/emergency supplies pack. It turned out to be a very wise decision.

As anticipated, it was a tough walk, but not in the way I had thought it would be. It was my understanding that it would be technically demanding—with lots of scrambling over rocks. But I never encountered that. In actuality, many of the trails were very easy to walk on—even grassy. It was not steep, except near the end.

But, despite the sun coming out to warm up the cold morning, the wind blew hard all day and was only stronger as I ascended. Near the top, I felt like a drunkard as I was buffeted about. I was really glad I did not have my full pack to act as a sail.

This is called the Ruta Hospitales because there are three sets of ruins of medieval pilgrim refuges (or hospitales) along the way. At the first ruins, I met Flor and her daughter August. Flor was very friendly and outgoing and we all hit it off right away. We would visit with one another frequently for several days, and you will see how Flor was a true pilgrim’s  friend and took care of me at the end of this long day.

The second set of ruins were in fairly good condition and I spent some time exploring them. There were several sheltering buildings as well as a very large walled enclosure that I imagine was to corral the animals that accompanied many historic pilgrims. 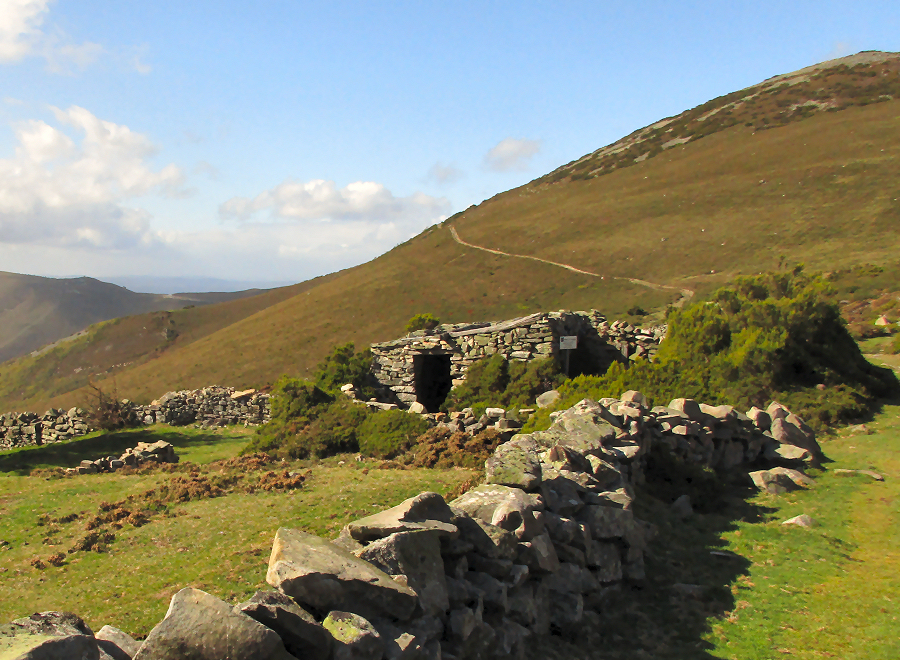 Up I walked into windier and colder conditions, with rain squalls threatening. I began to get hungry, but there was no shelter from the wind. I finally had to duck behind a little rise and do my best to quickly eat a tin of tuna and some bread.

Ahead of me I saw a ridge ahead with a drop on both sides. The wind had gotten so strong that it was harder and harder to walk in a straight line. Once I got to the ridge, however, I saw that there was plenty of room on the trail and little chance that I would be blown away. However, I looked back up the trail and could not see Flor and August behind me. It was getting late and I worried they would get caught up on that mountain. But I later crossed a road where there was a little advertisement for a taxi service. Obviously the taxi had pilgrim business in mind! I remembered that Flor had mentioned a taxi, so I assumed that they would take advantage of it.

As usual, the last couple kilometers seemed to stretch into miles. I envisioned eating a “menu” (full meal) with Flor and August, and the image kept me going. The last part of the trail was pretty steep and rocky downhill and I had to be careful on my fatigued, wobbly legs not to fall. It was dark when I finally arrived in Berducedo and approached the Hostal Camino Primitivo. There was Flor coming out the door with wet hair in the cold night, and August followed. They had been worried about me, especially when they saw my pack in the albergue hours before I arrived. As Flor watched the albergue fill up, she was concerned that I would not have a bed, so she took it upon herself to pay for my bed for the night. She even put a reserved sign on a lower bunk! Bless her sweet heart!

It was disheartening that the albergue was not offering meals for the night and had closed their pilgrims’ kitchen because of a special event. Also, walking around town, we found that no other bars were open and the very small store had little to offer. I was VERY disappointed. It does not pay to anticipate things too much—but I usually cannot help myself. I made do with some yogurt and tea and fell into bed—I did not care anymore. But, in my journal I wrote: 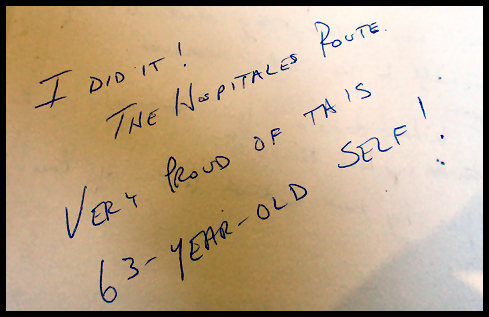