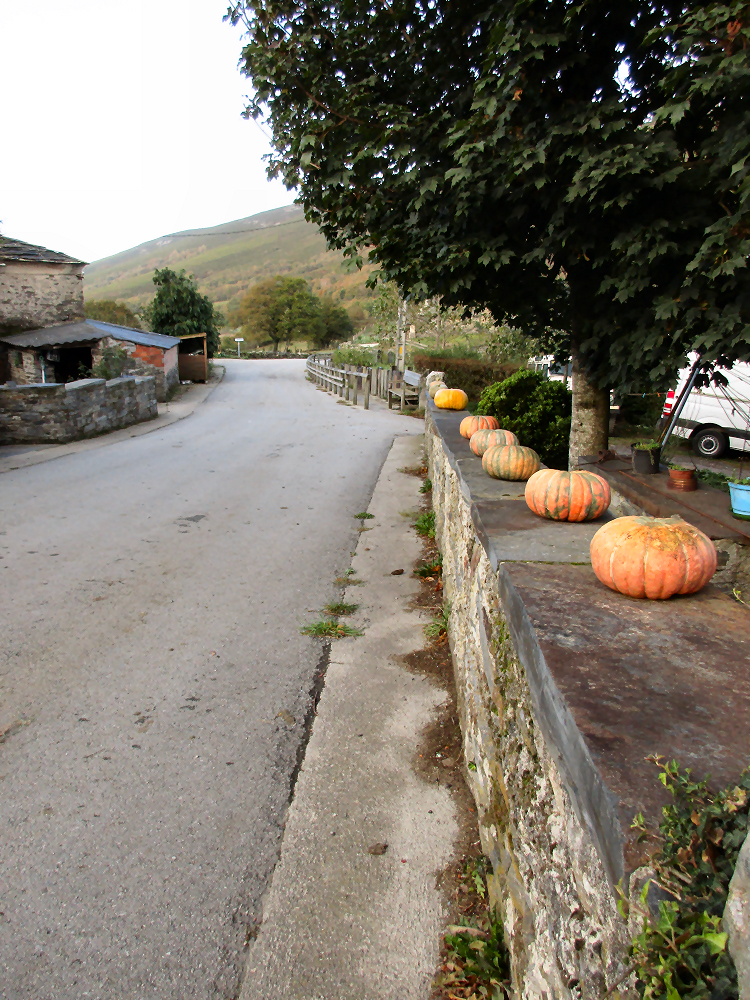 Today turned out to be a beautiful walk, even if it was tough in its own way. It was a clear fall day which made the pumpkins in the fields and beside the road pop out with their orange color.

After a short, gradual, cold climb out of Berducedo, I was walking just below a ridge of more wind turbines. They seem to be everywhere in Spain. Now I could see where the Salime Reservoir was below me, but it was now a punch bowl of fog.

From La Mesa, I started descending and descending. It would be 8 kilometers of downhill—from almost 1000 meters all down to 220 meters—a real knee killer.

Part of the way was through a forest which was destroyed last spring in a massive forest fire. The multi-year drought here is taking its toll. It is usually raining a lot here at this time of year, but the drought continues. Nice for walkers to have day after day of fair weather, but not so good for the farmers and environment.As I approached the reservoir, the fog slowly lifted and I had great view of the saphire lake to keep my spirits up as the trail played havoc with my knees. 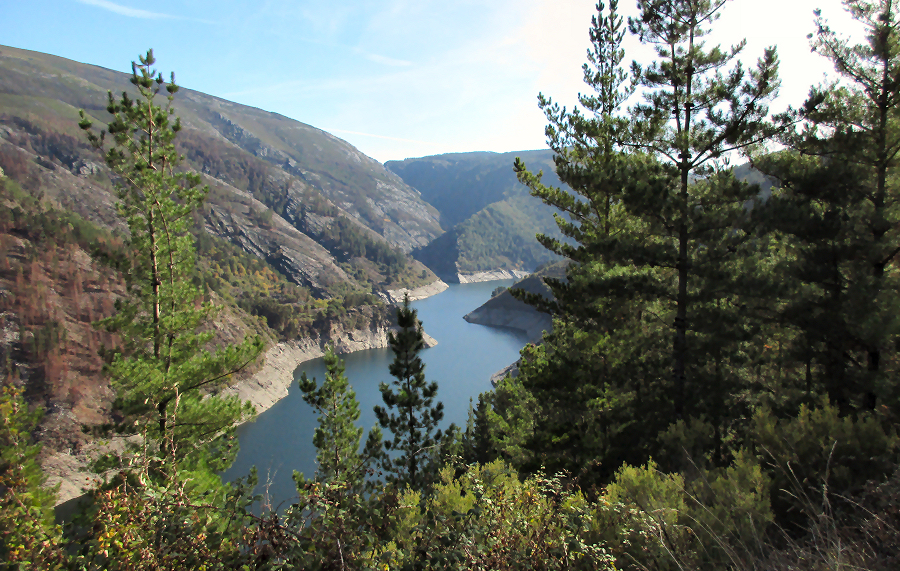 Once I made it down to the dam to cross the Navia River, I spent some extra time resting and enjoying the views.

I crossed the dam and it was uphill again to a resting place. On the way up in the first kilometer, I met Claud, a retired neurologist from Geneva. It was not hard for either of us to stop at a nice hotel for beer and café con leche.

And again! The last 2 kilometers stretched itself into 4 or 5. I sometimes laugh as I imagine myself in some kind of Twilight Zone episode at the end of a day that does not seem to want to end. It is surely a phenomenon of tiredness coupled with the anticipation of the day’s end.

Despite my sometimes desperation to get to the albergue, I don’t have any desire to end my Camino or quit…in fact, I look forward to continuing.

Sergio, a veteran of seven Caminos, invited anyone who wanted to come to a local bar to eat together. The table ended up holding ten of us and we drove the patient waitress a bit crazy. She had lots of silver jewelry, nose rings, earrings, necklaces and a half forearm of bangles. She wore a lacy red blouse and looked exotic. She spoke most of our languages…Italian, English, French…well enough to help us through the menu choices. The problem was, we did not all arrive at the table at the same time. Peregrinos kept coming in and sitting down and adding to the order, including sundry drinks. She kept everything straight with a smile on her face. But at the end of the night she brought the bill and it was obvious that it was up to us to figure out who owed what! Luckily, I had opted for the €10 daily menu which brought me a nice cabbage stew followed by a delicious perfectly-baked cod fillet and fried potatoes, wine, and dessert. Sergio was in charge of the bill so I handed over €10 plus 1 for a tip. Sergio shook his head violently and tried to give the gratuity back, “No en Espana!” he said determinedly. (It is not customary to tip here.) Another (female) peregrina and I shot back, “Si, en Espana!” and I clarified that we had about driven the waitress crazy—she deserved it. As I left I found her and said, “Muchas gracias por su paciencia! Este mesa es muy deficil!” (This table is very difficult!) She laughed and thanked me. I hope I shamed everyone else into leaving a little extra that night.

It was not hard to return immediately to the albergue and turn in…another longer day faced me tomorrow.