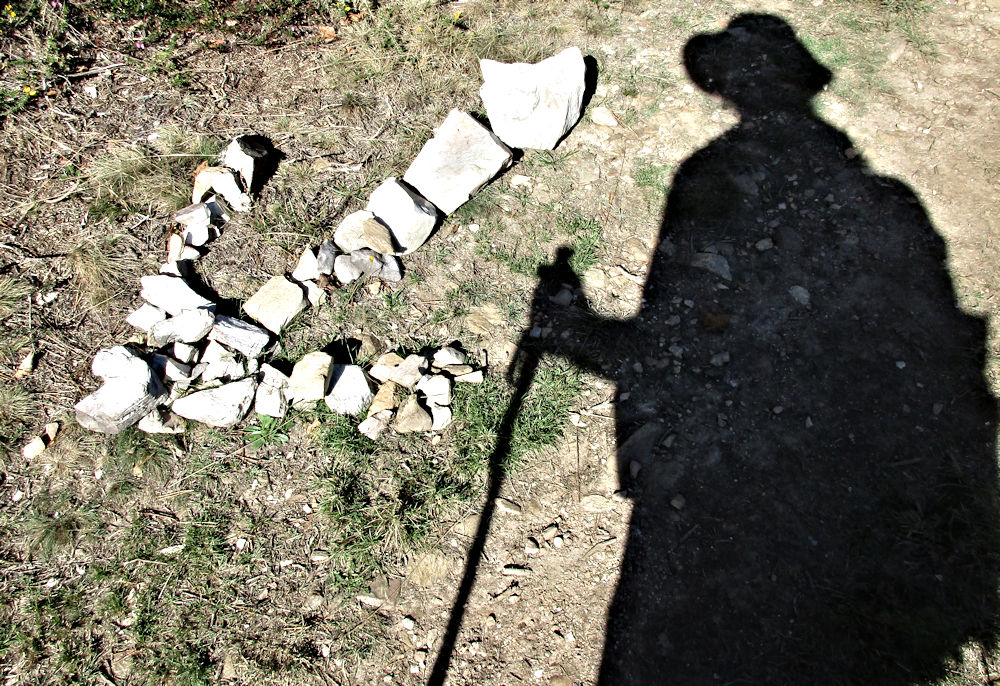 I awoke to a cold day 5◦C (41◦F) and wanted to get moving to warm up. But first, I was out of food; not even anything for breakfast. This sometimes happens on the Camino, no matter how well you plan. You know you need to stock up, but you go through village after village with no stores, or all the stores are closed when you are passing through. Now I had to wait until a store opened or I would have neither breakfast nor lunch. I thought I would have to wait until 10:00 am, which makes for a very late start. However, as I walked down the street looking for an ATM machine, I passed a tiny store that had enough provisions for my day, and it was open.

The walk started uphill, which is not the best way to warm up cold, unstretched muscles. The pea-soup fog was lovely in the village, but once I was on the highway, I felt truly unsafe, knowing drivers could not see me until the last minute. Once I left the highway, the trail became tranquil. 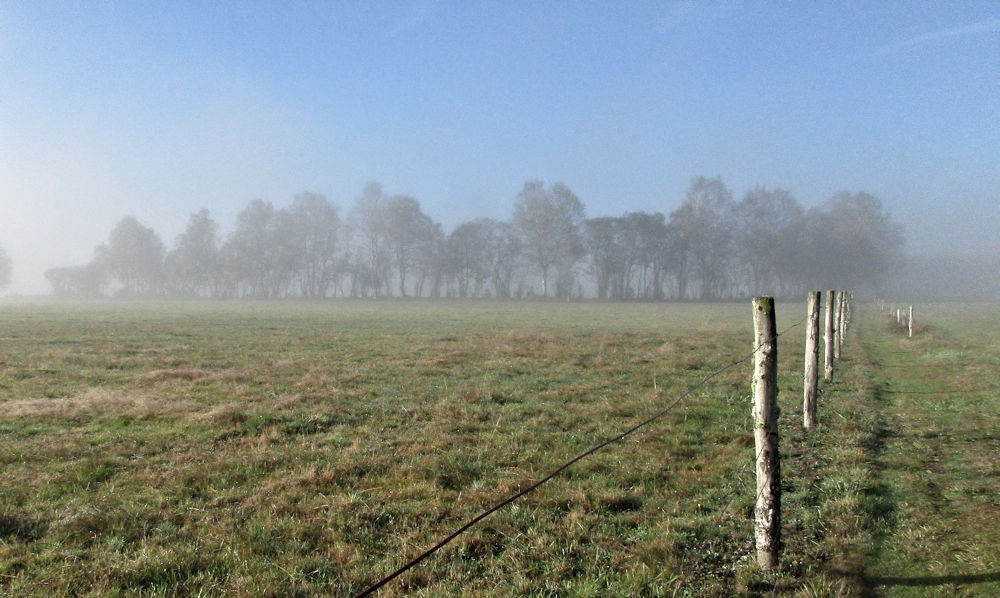 I start slowing down, literally, when I need to eat. If I wait too long, I become a bit stupid. Today was a case in point. When I started to get hungry, I decided to begin looking for a likely place to eat—preferably with a bench or table and a view. I kept hiking up and up, telling myself that if I did not find one around the next bend or over the next rise, I would just sit down and eat. And I kept going and going, for…about…two…miles! Now I was completely out of energy and my brains had fallen out of my pocket. I laughed as I argued with myself, “What are you expecting? A table overlooking the valley? Complete with a fuente (fountain) with cold water? And a spa for my feet? A masseuse?”

Finally, in frustration I sat down on the rocky trail—no bench, no view, no bloody masseuse. But after refueling and resting, I felt much better. Luckily, I never found a picnic table…I would have been livid if there had been one just past my “picnic” site.

Sergio had told us that today was going to be easy, and I believed him. I thought it was a good thing, since I knew it would be long. The weather was perfect—very Indian summer and hardly a puff of wind. Not too hot after the morning chill burned off; not too cold. 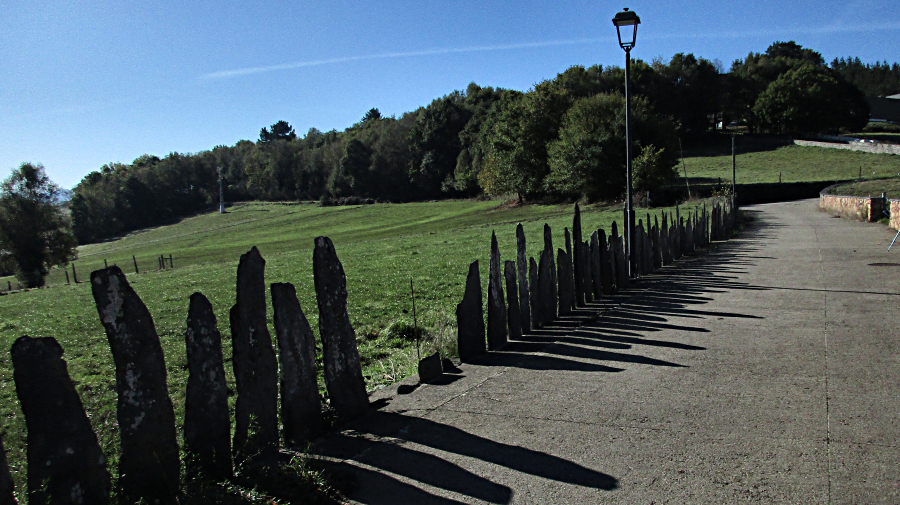 It was a longer, steeper uphill climb to the top of El Acebo than I had expected. Wind turbines were in sight all day and as I reached the top of the ridge, I was right next to them—they are HUGE!

Then it was downhill again, but not as hard as yesterday. Now I was running out of water! It was no longer 5◦! Where is one of those public fountains when you need it? I stopped at a farmhouse to ask for water. In the past, people were very welcoming to us pilgrims when we needed water. However, this woman was wary and said I could have “un poco” (a little). I was taken aback! When she returned with my bottle, she must have noticed my pack for the first time and realized I was a pilgrim, because she became much more chatty.

The rest of the day, I could think of nothing except how much farther it was to A Fonsagrada. I also fell into my usual mistake of looking at the map and deciding I was much farther along than I was. When that happens, and I see my miscalculation, I always get furious and try to blame the map, knowing that is really my own fault. When I finally got close enough for A Fonsagrada to come into view, I see that it is WAY UP ON A HILL—a steep climb all the way! I cursed the whole way into town, fighting back tears of anger and exhaustion. This had to be Sergio’s fault! I put my head down and one foot in front of the other.

My offline maps download on my tablet did not reach to A Fonsagrada and I learned later that it would have been a more gradual climb if I had taken the highway instead of following the Camino waymark arrows. That is what Sergio and his partner did, I found out later!

Once in the village, I was having a hard time finding Albergue Cantabrico. I rounded a corner and saw the back of a gray-haired man in a pulperia (a bar specializing in octopus) Was that Sergio? I looked again, and it was! I yelled, “THAT WAS NOT EASY!!” He put on his innocent French face like he did not understand. We laughed and he directed me to the albergue—and what a nice albergue it was. I would stay there for three nights… 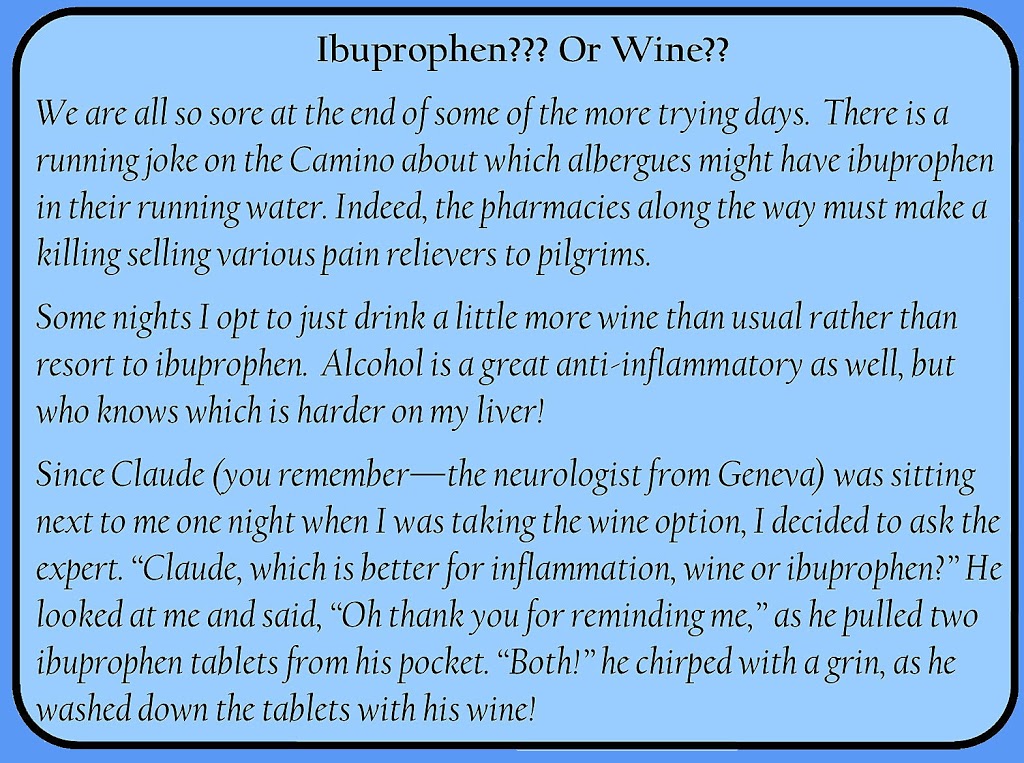 But wine has the added side-effect of making me content with my life… and just a little sleepy…Buenos noches!