On April 14, it was time I said a farewell to the Outer Hebrides. I decided to take an early morning ferry from Berneray Island to the Isle of Harris. Later, I figured out that it cost me a whopping £40 more to return to the Scottish mainland on this route than it would have if I had returned to Castlebay and taken a ferry to Oban from there.

It is okay, though, because if I had not come to Harris, I would never have met Robert.

It was a VERY early, cold, and windy two-and-a-half mile hike to make the first ferry off Berneray. If I missed it, I would not be able to get to Skye today. I walked fast and waited until I was safely on the ferry before eating my breakfast. By then I was fairly “peckish.” Upon docking at Harris, I descended the stairs from the passenger cabin. There were only about four cars on this Sunday-morning boat and a man leaned out of a window of one of them to ask if I need a lift. Oh, those friendly Scots! I was about to accept heartily when a deckhand quipped, “Oh, he’s okay, but he may talk you to death.” We all laughed. Everyone knows everyone on these islands. Well, I was about to get an unexpected grand tour of Harris—complete with laughter and amazement! Is there any other way to see this island?

First off, I read the logo and company name on the side of the little van: “R. Dog Optometrist.” I did not understand the initial “R.” but was intrigued to think that there might be enough wealthy population on these sparse islands to provide adequate business for such a specialty.

Once I was settled in the van, I asked Robert to explain his work. He proceeded to proudly tell me how he had built his practice from a small clinic in Stornaway on Harris to two clinics (one on Barra) and that he had a staff of nine! NINE! NINE? How many dogs could have eye issues on an archipelago inhabited by barely 15,000 people?? Not to mention the fact that most of those people were pretty traditional farmers. I could not imagine many of them utilizing the services of a dog optometrist, no matter how many dogs they had. I just kept asking Robert questions with my eyes wide open in amazement and saying “REALLY??” or “That’s amazing!”

About ten minutes from the ferry dock, we were talking about something else and Robert mentioned his practice again. And NOW I laughed so hard I could barely talk. Robert is a HUMAN optometrist. As I recovered, I had to ask, “Why in the world do you have ‘Dog Optometrist’ on the outside of your van?” He gave me an odd look and laughed out loud. Robert’s surname is “Doig,” and the sign says “R. Doig Optometrists!” He quipped that he had thought about putting a picture of a dog with an eye patch on the outside of the van. I was apparently not the first one to make this mistake. But I may have stayed under this mis-apprehension for longer than most—I can be a bit dull-witted at times.

Now that I was on Harris, I was regretting I did not have more time in the Outer Hebrides. Harris is magnificent—and when I say magnificent, I mean completely-out-of-this-world stunning. I could only look longingly at the landscapes and beaches we passed, wishing I could just get out and walk and walk and walk.

Robert, a natural born tour guide spoke eloquently about his world. He is extremely proud of Harris. When asked what time my ferry would leave, I had the right answer: “Not for about three hours.” Then he lamented that if he had known that he would have taken the longer “more scenic” route to Tarbert. More scenic? How could it be more scenic than these heart-leaping views of cliffs and beach? I was so spellbound, I forgot to pull out my camera.

He put on the brakes and made a hard right turn up a steep road. “I have something to show you,” he said. As he regaled me with story after story about what I was seeing around me. He pulled over at the beautifully-restored St. Clement’s chapel and took me up to the graveyard to show me the tombstone of a local man who lived, I think, in the 18th Century. It mentioned that he was brave in battle and could wield a claymore with the best of them. But it did not end there…he married his third wife after the age of 70 and they proceeded to have 19…NINETEEN!…children. Quite a manly man he was! These Scotsmen…wow!

Back on the road, we headed back south and suddenly I noticed that we were back at the ferry dock we had come from. I looked suspiciously at Robert, “You aren’t thinkin’ that just because I thought you were a dog optometrist that I will believe that this is the Tarbert ferry dock are you?” Like I was some dumb tourist who thinks all ferry docks look the same. (Well…hmmm…I did believe he was really a dog optometrist for an awfully long time.)

“No,” he laughed, “To show you the church, we had to circle around. Sorry we will have go back up the west highway again.” Sorry? Sorry? Oh, what a shame, I would have to look at all those lovely cliffs and beaches yet AGAIN!

Robert is a very dapper Scotsman—proud to be wearing an exquisite Harris Tweet suit complete with waistcoat and a traditional flat cap. And now for his last job as my private tour guide: he let me out in the parking lot of the Harris Gin Distillery with a recommendation that I visit before boarding the ferry.

So, if you ever accept a ride from Robert, the dog optometrist, on the Isle of Harris, expect to laugh a lot, be entertained, educated, enchanted, and transported in more ways than one. But watch the time, unless you don’t care if you miss the ferry.

Thank you, Robert, for a magical whirlwind tour of Harris. I’ll be back! 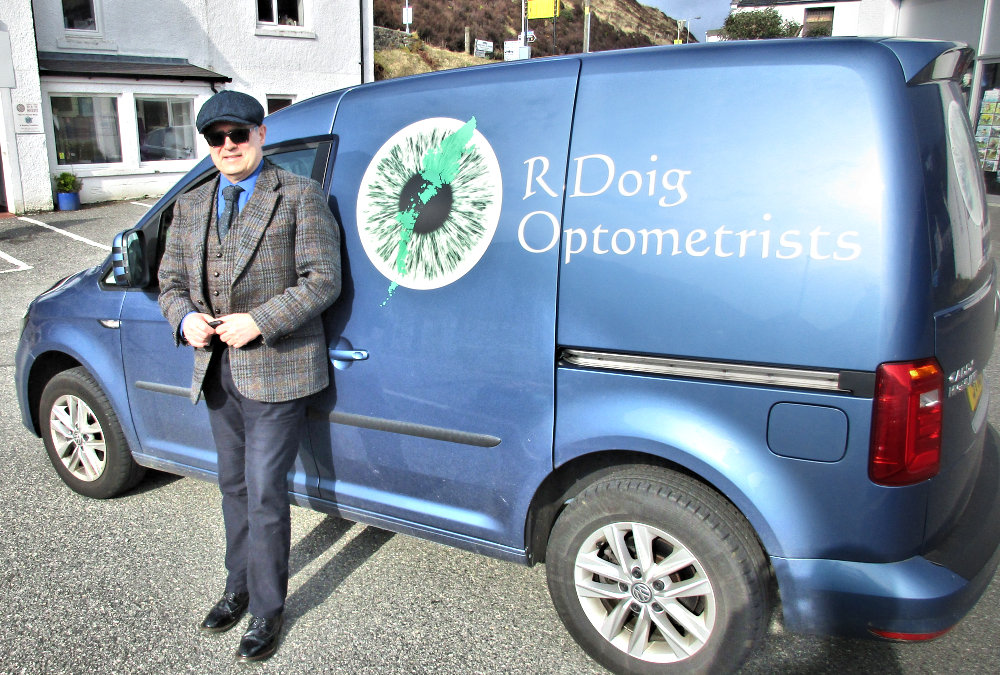