Arriving in Melide yesterday meant that I was now finished with the Camino Primitivo route and had joined the Camino Frances—the busiest and most well-known of all the Caminos. That is why the albergue in Melide had so many beds. I had seen the last of the days when I would be walking alone almost all day with plenty to contemplate. And…I would miss them. This was a pilgrim “highway” now.

My plan was to wait in Melide this morning until the grocery would open—about 9:30 am. That is a late start, but I really needed to restock my food supplies. HOWEVER, I neglected to realize that today, November 1—All Saints’ Day—is a national holiday in Spain. No grocery store would be opening! I did find a carneceria/panaderia (deli) which was doing a brisk business, and bought some salami and bread for my lunch.

So, I started for Azura. Surely there would be open cafes along this route!

I noticed new phenomenon here on the Camino Frances: people did not seem to be as welcoming of pilgrims as I had experienced on the del Norte and Primitivo. (I got few responses to my “Buenos dias” this morning.) There is a lot more trash. AND, sadly, those beautiful waymark stones were all—every one of them—defaced in some way: covered in graffiti, distance plates removed, and the beautiful shell tiles missing. No wonder the locals have little to say to pilgrims. So sad…

One of the least-defaced distance markers on this part of the Camino.

This cast a kind of anti-climax to my walk. I feel like I don’t want to see anymore; like I don’t care if I make it to Santiago—only 2 days away. I am not interested in being part of this circus act. From my journal:

I wondered today if my own perspective (overshadowed by the day when I could not find food) has sullied what is real about this part of the Camino. But there is no denying the sadness about the trash and graffiti.

And later:
These last three days feel like some kind of obligatory finale that I am not supposed to skip.

After my lunch break, I decided to take my time walking on to Azura—taking a methodical step at a time; listening to my trekking poles rhythmically hitting the ground; ignoring the pilgrims passing me; meditating what my Camino had meant to me.

Before checking into the Albergue Los Caminantes, I stopped at a restaurant and enjoyed the menu del dia—a large salad followed by tender roast pork slices on top of thick potato chips and chocolate torte for dessert. The torte was so good that I took tiny bites of it to make it last. The almost half-bottle of wine left me contented and fixed all the ills of the previous two days. It was probably the best meal I had eaten in two weeks!

Maybe tomorrow I will start to look forward to Santiago. 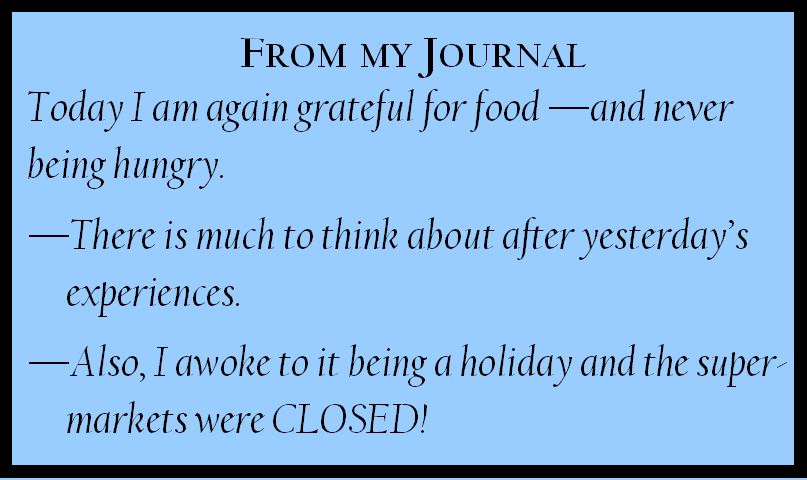 Today would be the first one in which I did not choose something for which to be grateful. On these last two days before Santiago, I decided to think about what this trip has meant for me.

The weather started out “iffy” and deteriorated. Within an hour of my start, it began to rain…then pour. My poncho whipped around in the wind so much, that it was useless for keeping my legs dry. Then I started to get cold. A great follow-up to the last two days!

BUT, there was one difference—cafes and bars presented themselves often.

Then, as the rain let up, I kept encountering one pilgrim who was yelling into his cell phone for (I am not exaggerating) at least an hour. I tried stopping to let him get ahead of me. That often works because just about everyone walks faster than I do. But not talky pilgrim. I kept catching up with him when he would stop—to make some important point to his friend, I suppose.

Finally, I picked out a café/bar so I could stop and let him get way ahead. I hung up my wet gear by the door. Oh my gosh…there was a FIREPLACE! I was not the only pilgrim trying to dry out. While my food was being prepared, I stood in front of the fire rotating to get all sides warmed up. Then I had a nice long sit with a couple coffees and a nice meal of chips (fried potatoes), eggs and ham. By the time I finished, the rain had stopped, my clothes were almost dry, and loud-talky pilgrim was nowhere to be seen. My attitude was adjusted.

The ads for private albergues abound on this part of the Camino. A few miles before entering Pedrouzo, I passed little sheltered rest area with an ad playing a slide show and peaceful classical music for Albergue Porta de Santiago. The photos showed a heavenly-looking place for only ten euros. I figured that the beds would all be taken before I got there. Well, it was worth a shot…I got a bed—even a lower bunk!

Inside there was soft classical music playing and everything felt hushed. I told the host that it felt like a spa. He seemed to like that.  Tomorrow would be the day I would enter Santiago…